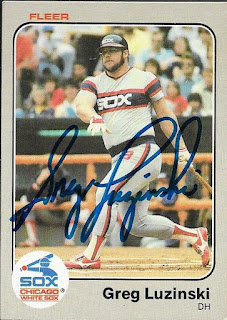 One of the last free signers that I was able to get at the National was Greg Luzinski.  I don't really remember his signing, I just remember standing in line forever.  I thought this 1983 Fleer would look cool signed, and I was right.  I wasn't able to use a Wild Card on him, which was disappointing, since I had a ton of his cards that I could have gotten signed.  By the time I was done with his signing, I was over trying to get anyone else.  The VIP signer experience at the National was rough, and I don't think I will work as hard when I go next year.