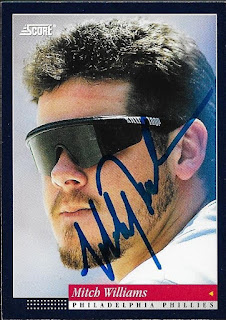 One of the first signers that I was able to get at the National was Mitch Williams during the VIP party on the Wednesday of the show.  They were supposed to have Steve Garvey there as well, but he backed out at the last minute and was replaced by Roy White and someone else (I can't remember who).  I got White on a baseball for my good friend, Drew, but since I didn't have any cards of the other guy, I didn't bother.  I did have a bunch of cards of Mitch Williams and ended up getting three signed.  Two of them went to my friend, Max, and I kept the above 1994 Score.

I got this 1994 Score out of one of the boxes of cards that Mom picked up for me.  One of them (a 5,000-count box) is almost all 1994 Score.  This was a really nice set back then, but was prone to sticking together if the cards got hot.  Luckily, the cards were well taken care of, and I have been able to use some for graphing.  They look really nice with blue sharpie.
Posted by William Regenthal at 9:47 PM