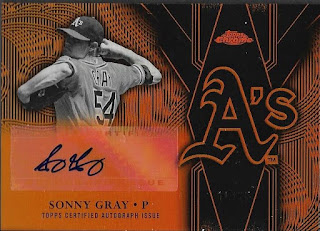 My friend, Michael, sent me a really nice birthday gift that had several autographs included.  He contributed to my Sonny Gray side-PC with this really nice Topps Chrome auto.  This is the Team Logo autograph and is numbered 1/25.

I haven't added too much to the Gray PC this year, but I probably ought to.  With the terrible season that he has had this year, the values on his cards and autos has gone down tremendously.  I got a few Gray cards at the National (that I will show soon) for really cheap prices. 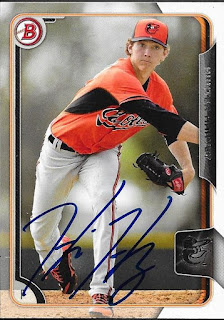 Another guy who's stock has fallen is Orioles #1 draft pick, Hunter Harvey.  Harvey has frequented the DL more often than not in his brief professional career.  He has a long road ahead after having Tommy John surgery earlier this season.  This is an IP auto on a 2015 Bowman that Michael sent along.

Michael also included two Jimmy Nelson autos and a bunch of refractors from 2016 Chrome.  I have known Michael for almost 5 years now, and have spent a lot of time with him at Orioles Fan Fest and some Orioles games.  When I went to Baltimore in July, I was able to have dinner with him, and ride around the city (once going the wrong way down a one-way street.  Oops.).  Michael is a great guy and I am glad we are good friends.  He is off to college now, working toward a career that I am certain that he will excel in.  He is one driven kid.  Thank you so much for the gift, Michael!
Posted by William Regenthal at 8:41 PM