Birthday Present to Myself - Rocky Set 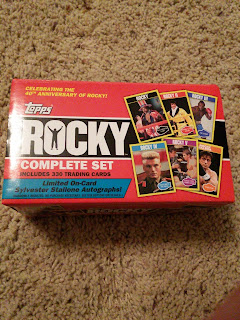 Because of the amount of money that I spent at the National, I told my wife that she really didn't have to get me much of anything for my birthday.  On top of that, I really didn't want her to re-gift a bag of socks that I had bought myself and forgot about (long story) either, so I bought myself one thing that I had seen advertised on Topps.com.  When it arrived from Topps a week before my birthday, I had my wife wrap it up to give to me on my day.

This Rocky 40th Anniversary card set was being offered by Topps at a pretty decent price, so I picked it up.  I didn't pull one of the randomly inserted Sylvester Stallone autograph cards, but overall, I was really happy with the set. 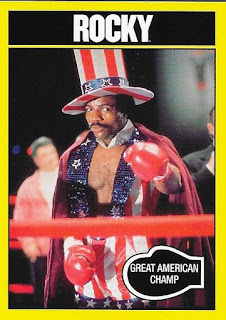 The set features scenes from each Rocky movie from the original to Rocky Balboa.  They did not include anything from Creed.  That's ok, though, because they had plenty of Apollo to go around!!
Posted by William Regenthal at 6:36 PM