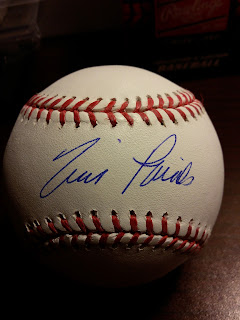 I told Raines that I hope to hear his name called in January for the Hall.  He said "Yeah, I've been hearing that a lot lately."

Raines has appeared on the Hall of Fame ballot 9 times and with the new eligibility rules, next year will be his last.  He has gotten as much as 69.8% of the vote and should be able to get the required 75% next year.  If not, he will most likely get in via the Veterans Committee.
Posted by William Regenthal at 11:27 PM