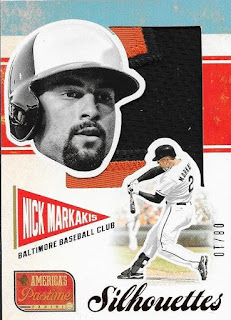 One of the cool things about the bargain boxes at The National is that you can find some really nice stuff when you really aren't looking for it.  I had no Nick Markakis cards in my mind to check for while there, but I found this really cool patch card numbered 8/10.

It's a 2-color patch from 2013 Panini America's Pastime.  I haven't added anything significant to the Markakis PC since he signed with the Braves before last season.  This card is a really cool one, even though the patch almost goes unnoticed.

I got the card for less than $8 as part of a bulk deal, so I likely got it for closer to $5.  Not too bad for a patch of that size and that low of a serial number.
Posted by William Regenthal at 5:45 PM