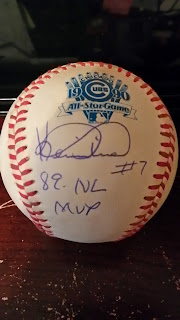 There was only one free signer at the National that I had interest in getting on a ball.  I found this 1990 official All Star ball for a good price on Ebay and figured I would get Kevin Mitchell to sign it.  His line was pretty long, like all of the others, but this one was worth it.

Mitchell inscribed his uniform number and 89 NL MVP on the ball.  He was surprised that I wanted it on the side panel below the All Star logo, asking me a couple times "don't you want it on the Sweet Spot?"  I wanted the logo to show with the auto, and it looks good, I think.