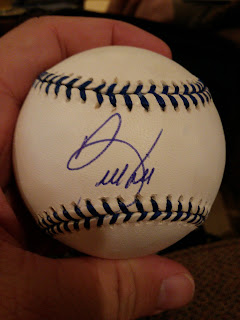 One of the coolest deals that I got at the National was this signed baseball of Bill "Spaceman" Lee for $5.00,  The ball is a Joe DiMaggio commemorative OAL baseball.  The vendor had cases and cases of them for $10.00 but gave me  a deal for $5.00,  I figure the ball itself is worth a lot more than that.

Lee appeared on the 1988 Hall of Fame ballot and received 0.7% of the vote.  He is most widely known for his eccentric personality, which led to his nickname "Spaceman".
Posted by William Regenthal at 9:21 AM