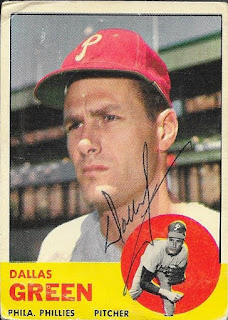 I received a TTM success on September 9 from former player and manager, Dallas Green.  THe cards had been out for a long time, and I finally got them back.

This 1963 Topps was a pretty cool card to get back, even though it was a bit beat up.  I didn't have many of them to get signed, so adding this to the Topps Autograph Project was a plus.  I only had one other signed 1963 Topps. 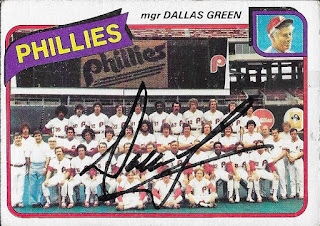 Here is a nice signed team card from 1980 Topps.  Getting these signed by managers is pretty cool, I think.