Birthday Package From Drew - Something off of the Top Ten Wishlist 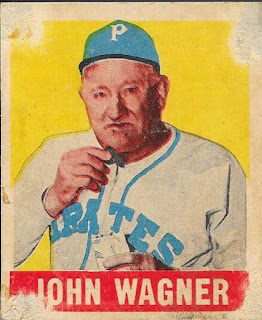 I got a couple birthday packages in the mail today, which helps extend my birthday for a few more days (not complaining about that!).  One of the packages was from my good friend, Drew.  Drew has been easing himself back into the blog world since he returned from an awesome study abroad program earlier this year.  Unfortunately, the trip exhausted Drew and his funds, so he wasn't able to attend this year's National.  Drew was sorely missed, especially since the National was relatively in his back yard.

Drew surprised me by crossing a card off of my Top Ten Wishlist.  This 1948-49 Leaf "John" Wagner is a card that I have kept an eye on for a while.  I almost picked one up at the National, but the guy wanted way too much for it.  This one has awesome edges and corners, but some paper loss on the corners; likely due to someone having it taped into an album. 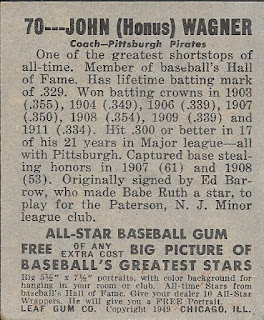 The back of the card looks flawless, and is a nice read.  I especially like the ad for the All Star Baseball Gum Big Pictures "for hanging in your room or club".  How many kids these days build club houses?  This is an awesome card. 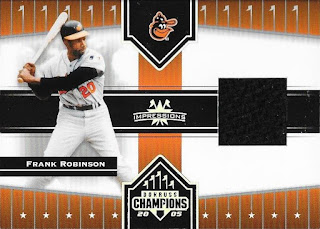 Drew also included this really cool Frank Robinson relic from 2005 Donruss Champions.  This was a nice set that came out back when I had just gotten back into the hobby.  I always liked these cards, but didn't pull any hits.  This Frank will look nice with my other Robinson cards (of which there are few, since Frank eludes me most of the time). 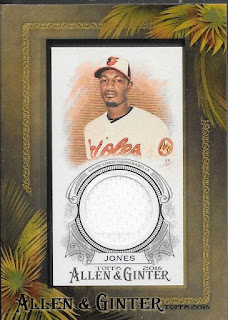 Finally, we have this Adam Jones framed relic from 2016 Ginter.  The framed relics seem to be tougher to find, since they now have the full card relics.  I made a trade with Drew to pick this one up.

Other than Mom or Andrew, Drew may be someone I have talked about the most on this blog.  He and I have been trading since he first broke into the hobby.  He was just about 12 at the time, I believe, and now he is almost done with college.  We have been close friends for well over 7 years now, and have even taken a trip to the Hall of Fame (Chris still says he didn't break your dad's car door).

Thank you so much for the awesome cards, and most of all, your friendship, Drew!  I greatly appreciate it, and can't wait to see you at next year's National!
Posted by William Regenthal at 9:30 PM