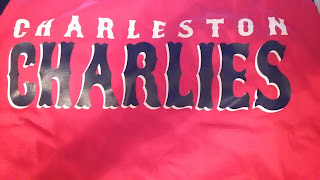 Mom woke me up last Saturday because I was sleeping in her guest bedroom and she and Dad were getting ready to head to a race.  So, I was half-asleep when she presented me with a gift bag for my birthday.  I don't recall where she told me she found this Charleston Charlies t-shirt, but it is pretty cool.  Cool because my youngest brother's nickname is Charlie and our new cat's name is Charlie.  Pretty cool.  However, I don't have a clue who the Charleston Charlies were.

Because you can find out anything with a simple Google search, I learned that the Charleston Charlies were a Triple-A team located in Charleston West Virginia from 1971 to 1983.  They were the former Charleston Jets, then relocated to Maine in 1984 to become the Maine Guides.  They now are known as the Scranton-Wilkes Barre Railriders.  The Charlies were affiliated with the Pirates from 1971 to 1976; Astros from 1977 to 1979; Rangers in 1980 and the Indians from 1981 to 1983.  Dave Parker and Tony LaRussa are a couple of many former stars who were Charleston Charlies.

Mom also picked up a Richmond Flying Squirrels shirt that looks really cool.  If Richmond can hold onto the team, maybe I can wear it to a game. 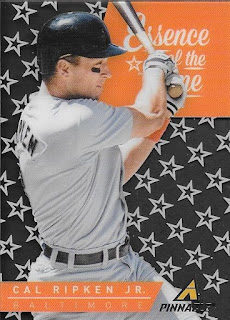 Mom also included this cool Cal Ripken acetate card from 2013 Panini Pinnacle in with my birthday card that came in the mail a couple days before my birthday.  The card isn't numbered, but looks really cool.  I'm glad to add it to my Cal PC.

I could write a whole series of blog posts about how awesome my mom is.  While I'm certain that she would just Love for me to do that, I will just advise that one can simply click on the "mom" tag at the bottom of this post and let all of my past blogs do the talking for me.  I will say that Mom always helped support my hobbies, ever since I was leaving coins lying on the floor at 8 years old.  She always showed an interest in what all of us were doing, and many times, collected alongside us.  She still buys packs of cards here and there.  Someone should tell her, though, that they have not printed any cards showing shirtless David Lough.

Thanks for the birthday presents, Momma!  I love them, and I love you!
Posted by William Regenthal at 7:53 PM