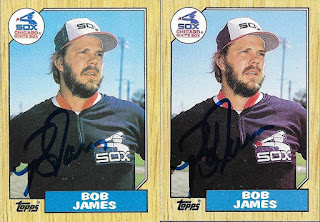 I received a TTM success from former pitcher Bob James way back on August 23.  I have had so much to post recently that I kind of buried these cards in my "to be blogged" pile.  I actually have another TTM success that came in later that I still need to post as well.  I also plan on sending out some TTMs soon, but will likely wait until the regular season is over.

I mailed to James on February 22 and got the cards back on August 23 for a 213-day TAT.  I actually sent three cards, but he only signed these two and returned the other unsigned.
Posted by William Regenthal at 11:40 PM