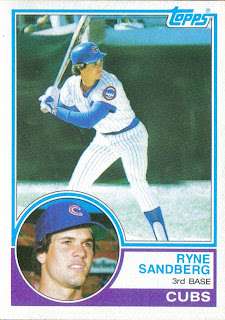 My son Chris and I went to the Raleigh card show just before Christmas to pick up a case of ball cubes.  Chris won a chance to pick a gift off of the Christmas tree and this is what he drew!  A 1983 Topps Ryne Sandberg RC.  This is Chris' first RC of a Hall of Famer.

I remember when I put the 1983 Topps set together and found that for some reason, 1983 Topps cards were pretty tough to find in bulk.  I don't know what the issue was; I had tons of 1982 and 1984, but had the toughest time finding 1983s.  Just a weird experience, I guess.  Anyway, Chris will be adding this to his collection.  I guess I'll have to help him find some more HOF rookie cards in the future.
Posted by William Regenthal at 7:26 PM