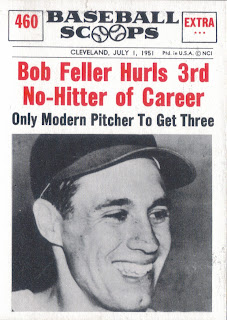 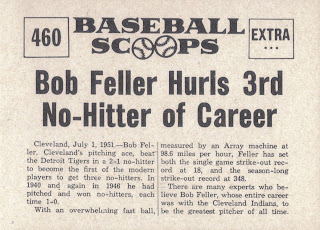 I know I recently went into detail on Feller's career, so I will spare you guys this time around.  Feller was amazing in his day, though.  I wonder what his career record would have been had he been on those late 1940s/early 1950s Yankee teams.  or what if he was on the Dodgers during that era?  Feller pitching to catcher Roy Campanella?  Wow.  Kind of scary if you think about it.  Anyway, like I said above, that does it for my Thanksgiving COMC pickups.  Next in my queue are cards from the most recent Raleigh card show.  Stay tuned.
Posted by William Regenthal at 9:08 PM

Those Nu Card Scoops are a great design. I never understood why they aren't more popular or were never really redone later on.

I commented earlier. I guess it got lost in cyberspace. LOL

Anyway the Nu Card Scoops is such and underrated set. I've picked up a few here and there and my yet decide to chase the whole set down. Fun cards.