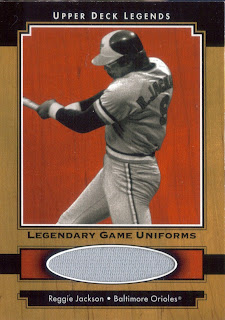 A lot of people forget that Hall of Famer Reggie Jackson was an Oriole for one season.  He signed with the Orioles in 1976, then held out because he was not too happy with the way the contract negotiations had gone (I think he hoped he would have gotten a better deal elsewhere).  He played 134 games with the O's that season, hit 27 home runs and batted .277.  Reggie left the O's for the Yankees the next season and won two World Series with them afterward.

It is really rare to find cards of Reggie in his Orioles uniform.  When I saw this relic card at the Raleigh card show, I had to pick it up.  I got it for $5.00 (a steal).  I'm just glad to have a Reggie relic of his Oriole days.  I think this has to be one of the few.  I'm not 100% sure is came from that actual season, but you never know these days.
Posted by William Regenthal at 1:22 PM

I didn't know that he had an Oriole relic. Finding him on an Orioles card is hard enough!