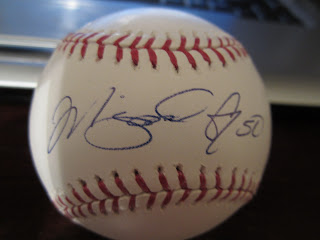 Before last season, if you would have old me that Miguel Gonzalez would finish the season with a 9-4 record and a 3.25 ERA, I would have asked you "Who?"  Yet, Gonzalez did just that.  He had a great season and was clutch in some big games, most notably against the Yankees in Game 3 of the ALDS, when he allowed one run over 7 innings.  The O's ended up losing that game when the diabolical Raul Ibanez homered twice against the might bullpen of the O's.

A close friend of the late Nick Adenhart, Gonzalez was given a glove used by Adenhart, which Gonzalez used this season.  Gonzalez had been a farm hand for the Angels and Red Sox, but had been plagued by injury and inconsistency.  He wasn't even a part of the Orioles' system until early March and did not receive an invitation to the Major League spring training.  Gonzalez started the year at AAA Norfolk and awaited his turn.  He got a break when he was called up and pitched effectively, first out of the bullpen and then as part of the rotation.

I'm hoping that Gonzalez is effective for a full season and can win maybe 14-15 games.  I think it is within the realm of possibility of he can stay healthy.  Gonzalez turned down  chance to pitch for Team Mexico in the WBC so he could get some reast and prepare for the 2013 season.
Posted by William Regenthal at 7:22 PM