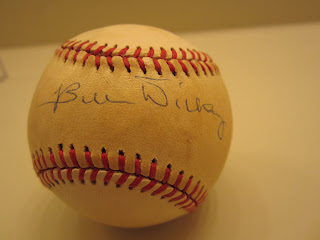 I am in Columbia, South Carolina at the moment, celebrating my younger brother's 30th birthday.  I always love making the LONG trip down here to hang out with him.  There are some really awesome vintage shops, record stores and antique shops.  Columbia is home of the Columbia Antique Mall that houses a shop called 'Chic Antiques.'  Conrad, the fellow who runs the shop is a friend of a friend (turns out to be a small world, afterall) and has a great many baseballs and baseball cards.  It was there that I found my 82nd Hall of Fame signed baseball, Bill Dickey.