One of the best parts about the December 2012 Raleigh show was that there was a new vendor there selling all of his 2012 inserts.  He had busted cases of 2012 Bowman and 2012 Bowman Chrome and was practically giving away the inserts. 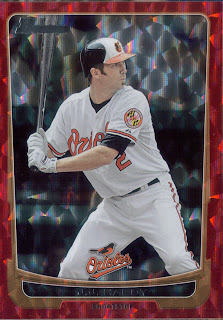 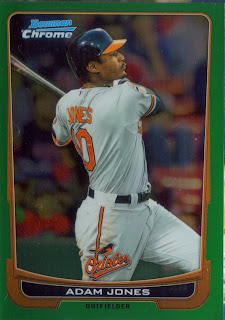 I also got several other Oriole parallels, including these two Bowman Chrome green parallels.  I think these look really nice.  I'm a fan of the colored Chrome parallels, when they are of players I want, so I was glad to grab a few greens for the collection. 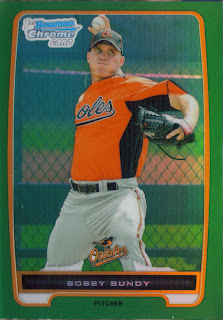 I was able to get some Bundy cards from the guy as well...  I got the above Bobby Bundy in my package of O's inserts and the guy also sold me a couple parallels of Bobby Bundy's younger brother, which I will blog tomorrow.  All of these cards, including the Hardy, were sold to me for $6.00.  A STEAL!  So, stay tuned to see the 'other' Bundy's I picked up!
Posted by William Regenthal at 9:49 PM

3 bucks for a red ice parallel is a steal. I havent been able to find any of the guys I want for that cheap

Love the JJ Hardy card. Really sweet. I live ten minutes from the Fairgrounds, but I have only been to one card show up there. I need to go back. Thanks for sharing your finds.

Those red ice parallels are amazing.

Even with my "dime box" way of spending, I'd still probably pull the trigger for one of those at three bucks.