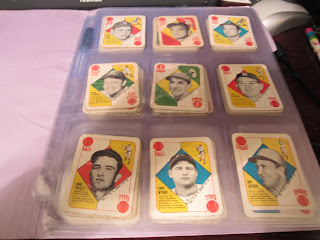 Well, I have blogged for you each and every card from the 1951 Topps Red Back set.  All 52 cards were chronicled.  It was a fun set to blog.  There were some big stars in the set, such as Yogi Berra, Warren Spahn and Bob Feller.  We learned that, of the 52 players in the set, only 10 of them are still living.  10 of them went on to become big league managers and 8 of them were enshrined in the Hall of Fame.  Not bad.  It's kind of sad that only 10 out of 52 of the players are still living, but the set is 62 years old now.

So, I hope you all enjoyed this feature of the blog.  I'm not sure if I will do this again, as all of the other sets I have completed are pretty huge.  I might do it again if I finish the 1961 Golden Press or 1961 Nu Card Scoops sets.  We'll see.
Posted by William Regenthal at 5:26 PM

I enjoyed the series dude, good job! It's a beautiful set, and a good thing you found it!

That was a nice series, and I enjoyed it! Looking forward to others!