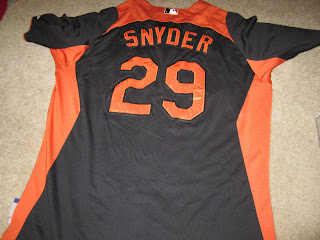 One of the coolest things I got from Fan Fest was this Brandon Snyder batting practice jersey for $50 in the memorabilia room.  Last year, I thought the memorabilia room was really cool, so I saved up some money with the hope that I could come across something really awesome.  I have always been a Brandon Snyder fan since I met him in Winston-Salem at a 2008 game between the Frederick Keys and the Winston-Salem Warthogs.  It was my first baseball game with my mom in probably 15+ years at the time and we took my son, my brother, sister and nieces.  Chris was only 2 at the time and was really fussy, but Brandon gave him a game used baseball that he signed.  He also introduced us to Matt Wieters, who had just joined the Keys. 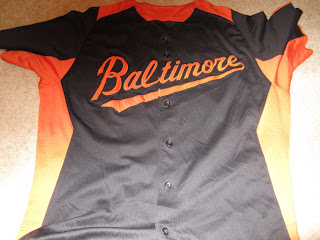 I was really disappointed when Snyder was sent to the Texas Rangers for cash considerations last offseason, but that is part of baseball sometimes.  He played 40 games for the Rangers in 2012, hitting 3 home runs and batting .277.  Snyder was re-signed by the Rangers in December, so I'm hoping he gets a shot at making the team out of spring training.  Brandon Snyder has always been nice to me, and i really hope he sticks in the Majors!
Posted by William Regenthal at 7:46 PM

Nice!!! I've been through the BP jerseys at FanFest before, but I never get there early enough to find a jersey with a number under 60, much less with an actual major leaguer's name on the back. I've got an orange jersey from a few years ago with #86 on the back (and no name).