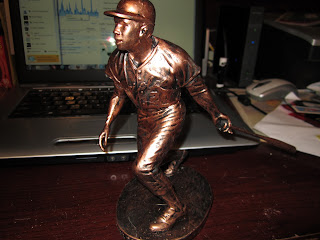 I was so busy waiting in autograph lines that I was afraid that I would miss out on the freebies given away in the freebie line at Fan Fest.  Luckily, Ryan brought along a friend who waited in the line for us so that we could go and get our respective autographs.  I was glad he went through the line for me because they were giving away Frank Robinson replica statues.  The original Frank Robinson statue day was way back in April, long before the bandwagoners came along in 'support' of the Orioles.  So, it looks like a TON of Frank statues were available.  Unlike Cal and Brooks day, of course. 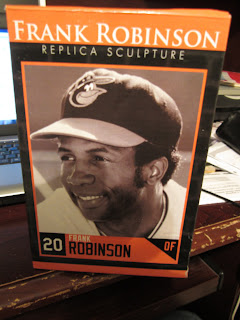 Apparently, the original plan was to give away the Earl Weaver statues, but since he passed away the evening before Fan Fest, that idea was scrapped.  I think that was a good plan because I'm sure too many people would have gone through the line and grabbed up a bunch of them just to sell them on Ebay and cash in on his passing.  Good call, Orioles.  Just my opinion. 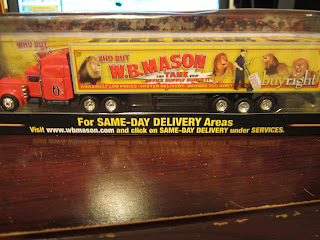 They were also giving away the WB Mason toy trucks, which is pretty cool.  I've always been a big Hot Wheels fan, so anytime I can get something I, er my son, can lay in the floor and play with is always a good thing.

I've almost wrapped up my Fan Fest experience.  I have a couple more posts I want to do on it and then I will be focusing on 2013 Series One, beginning some trades and Spring Training, among other things.
Posted by William Regenthal at 7:32 PM

This is a great idea. Credit the O's for having a freebie line that gives away statues of legends.