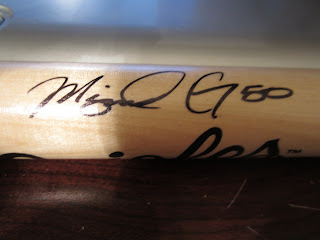 I got a message a few weeks leading up to Fan Fest from a young man named Michael who is as big an Orioles fan as I am.  For someone as young as he is, he sure has a sweet collection of Orioles autos, all sweet spotted on OMLB baseballs.  We were able to agree to a trade (which is actually really tough, because, being such a big fan, it is hard for me to part with anything truly of value) which would send me a signed Darren O'Day baseball in exchange for two autograph vouchers.  I figured that would work out just fine, so he sent me the below baseball.  He also sent me a picture of the above Miguel Gonzalez signed mini bat, so I bought that off of him for $20.  Again, not a bad deal. 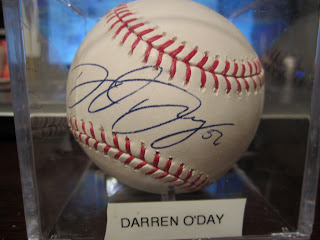 Michael and I met up at Fan Fest and exchanged our goods.  I really like both items and it was nice to be able to meet another die hard O's fan.  I especially wanted an O'Day signed ball, since he was lights out in the bullpen and (whats tougher than lights out?  Insert that term here) in the playoffs against the Yankees.  I'm hoping for another great season from O'Day this year.

Michael's a good guy who reads the blogs, but has yet to start one of his own.  Maybe he will, so we can all see some of the awesome stuff he has in his collection.  Thanks for the trade Michael, let's do it again soon!
Posted by William Regenthal at 4:33 PM