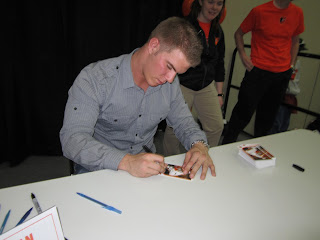 I already had a signed baseball of Dylan Bundy in my collection.  I got it last season at a Carolina Mudcats vs Frederick Keys game.  Bundy was really nice to Chris and I that day.

At Fan Fest, I purchased an autograph voucher for the session that included Nolan Reimold, Jake Arrieta and Dylan Bundy.  You and I know that my reason for buying the voucher was to be able to chat with Nolan Reimold, who is a central figure of this blog.  I wasn't going to complain, however, at a chance to get something else signed by Baltimore's young phenom (Bundy). 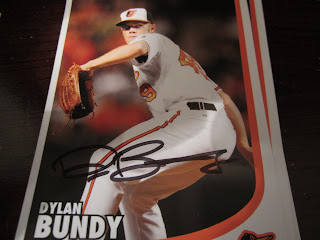 So, I got Bundy on an Official MLB baseball to replace the generic ball I had signed last summer.  That ball will likely be taken to the next Raleigh Card Show and will be authenticated by JSA and either traded or sold.  We'll see.  My son, Chris also got an OMLB ball signed that will go into his collection.  He also asked Bundy if he could have a signed card (which Bundy gave him) and then asked "Can I have a signed card for my dad, too?  Bundy obliged that request as well. 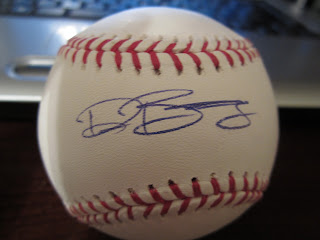 Bundy was very quiet this time around when we met him, but he were near the end of the line for the autograph session and I'm sure he was probably wore out from all of the goings on at Fan Fest.  I didn't find him to be rude or anything, just quiet.  My past experience with him showed me that he was a good kid and sociable toward fans and I appreciated it, especially when it involves my son.

I sure hope Bundy can live up to the hype surrounding him.  The O's really need an Ace pitcher.  I haven't felt like they had a true ace since the days of Moose.  (Speaking of, when can we get Moose at Fan Fest?  I mean really!)
Posted by William Regenthal at 6:26 PM

Very cool! Looks like your boy is a little autograph hound!