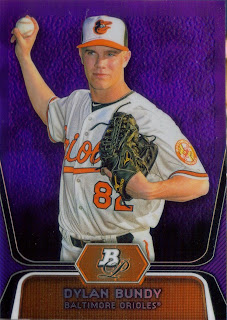 I told you in my last post about the Raleigh card show that I discovered a new vendor who busts cases of cards to build sets.  He sells off his inserts in order to fund his habit, so I was fortunate enough to be able to find some SWEET Orioles inserts while looking through his wares.  I asked him if he had any Dylan Bundy Bowman Platinum, to which he replied "I think I sold them all..."  So, I looked through his Bowman Platinums anyway, and guess what I found?  Oh?  You say it's easy to guess because I have already posted the pictures?  Ah crap.  Yeah, I found two Dylan Bundys out of 2012 Bowman Platinum.  I guess we wasted the good surprise on you, huh?  Gold star if you get the movie reference right there. 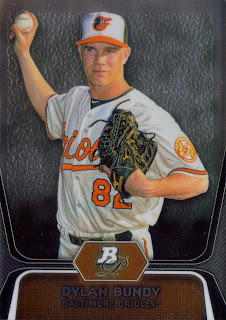 Anyway, yeah, I got two Dylan Bundy 2012 Bowman Platinum cards, one of which was a purple parallel.  Pretty sweet.  That being said, I added those two cards to my stack of O's I got, along with a couple Tim Lincecums for Chris and paid a whopping $6.00 total.  That's right.  I win.

I'm really excited about what the future holds for Bundy.  I really hope he doesn't turn out like Mark Prior.  Ouch.  Only time will tell, but he has looked really good so far!
Posted by William Regenthal at 8:53 PM

Looks like you got the refractor parallel on the bottom. They are hard to pick out but the textured background is the giveaway.

I can't tell these cards apart. I have to go to the back and look at the numbers to know what I'm looking at. They're all so freakin' shiny.

Also, Big Daddy. I almost said "Knocked Up," though because the same blonde actress says it.