Week of September 1 to 5, 2021, Graphing Recap of Cannonballers at Wood Ducks 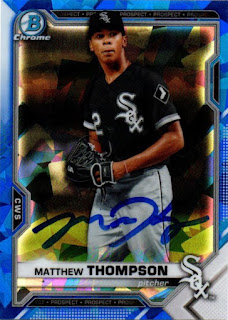 The next-to-last home series at Grainger stadium this season is now in the books and I was able to get a few cards signed.  I had picked up a few cards of some Cannonballers, and one of them wasn't even here in this trip (Jared Kelley).  This sapphire parallel of Matthew Thompson from 2021 Bowman turned out really nicely.  I didn't realize he was starting on Tuesday, so he walked right past me as I called his name.  Then I saw he was the starter, so I waited til post-game.  As he walked off the field, I called his name again; ignored again, and he hopped the gate nearby.  A few minutes later, I hear "Hey!  Did you need a sig?  Sorry, I wasn't ignoring you, I was in the zone, but I got you after the game..." so Thompson signed after the game, which was cool. 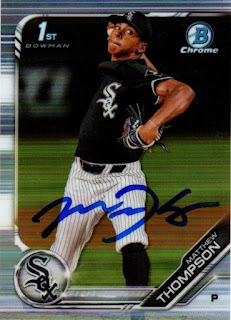 I had picked up the sapphire parallel and this 2019 Bowman Chrome refractor while I was at the National, so it was nice to get them done.  I had gotten him the past series on a few cards, so these were the only two I needed for my album.  I took some other 50/50s, and those got finished, as well. 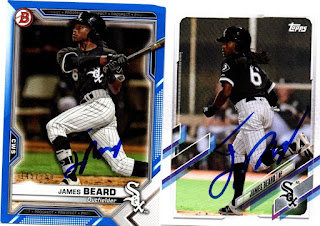 These James Beards shifted a bit on my scanner, but I added a blue parallel from 2021 Bowman, and a 2021 Pro Debut to the album.  Beard had a pretty brutal series; he struck out a ton and committed a few errors in the outfield.  He was generally one or two per when he would stop and sign, but he didn't stop too often.

Two of the John Ely cards I picked up at the National got signed, along with a 2008 Tristar Prospects Plus that was extra from a 50/50 with Gerard. 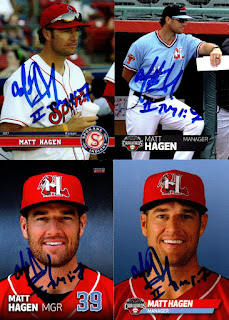 Matt Hagen was this week's roving instructor, so I finished off some old team set cards of his.  I was glad to get these out of the box and into the album. 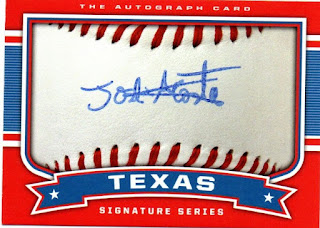 Finally, I used the second signature card that my friend, Ben, gave me on Jose Acosta.  Acosta stood by the fence and talked to Chris and I for a while before the game on Saturday.  He was really nice and acknowledged Chris and I being at most of the games.
We had a good time during the series, and the Wood Ducks went 4-2 in the series, which is keeping their playoff hopes alive.  I have this coming week off and then the last home series of the year will be the week of my birthday.  The Wood Ducks have their playoff fates in their hands, and we shall see what happens.