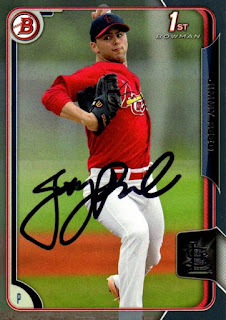 There isn't a card set I dread looking through more than 2015 Bowman.  The foil and vertical writing bother my eyes, but I still like getting cards from the set signed.  I just bear with the annoyance and find stuff as I go through my box.  I was able to get this silver parallel signed TTM by Jimmy Reed recently, and can now put it away in my album. 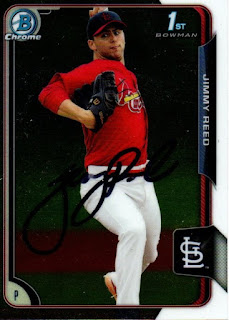 I also got a 2015 Bowman Chrome signed; those are a lot easier to leaf through, but I have far less of those than the paper ones.

Posted by William Regenthal at 5:09 PM