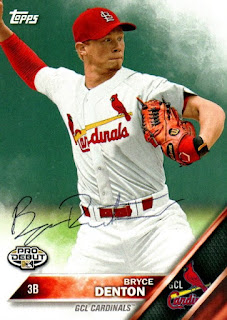 Here are a couple cards that I got out of my prospects box and signed TTM.  I actually sent to a Bryce Denton signing that my buddy, Gerard, put on, but the cards from that are buried beneath several other TTMs.  I'll get those posted sometime in the future. 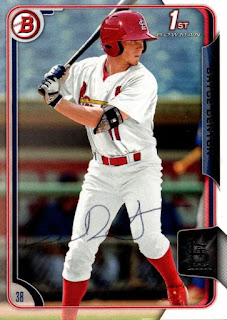 I was able to get a 2016 Topps Pro Debut (top) and a 2015 Bowman (above) signed by Denton.  He signed both in ballpoint pen, which is ok, but I prefer blue Staedtler or Sharpie.

I mailed to Denton on January 7 and got the cards back on April 3, for an 86-day TAT.

Posted by William Regenthal at 5:46 PM