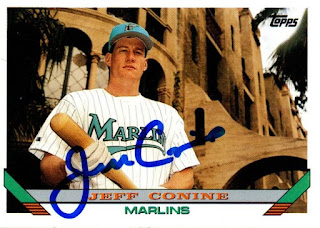 This 1993 Topps card of Jeff Conine is a card that I had been wanting to get signed TTM for some time now.  I had sent one to him when he was signing briefly, but never got it back.  So, when I saw that he was signing via a private signing recently, I went ahead and sent the card along.  It came back looking great, and I am glad I went ahead and got it done. 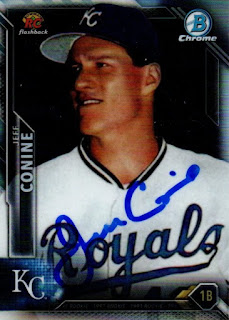 I also sent this 2016 Bowman Chrome RC Flashback, since I thought it looked pretty cool.  It also turned out great, and was worth sending in.

He appeared on the 2013 Hall of Fame ballot, but received no votes.

Posted by William Regenthal at 11:41 AM