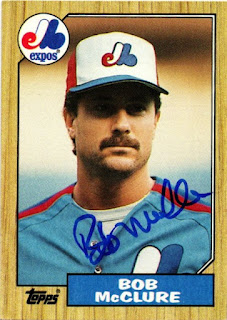 Here is another 1987 Topps that was crossed off of my list recently when I got it back signed via a private signing featuring Bob McClure.  The card looks great with the old Expos logos and uniform.

Posted by William Regenthal at 3:52 PM