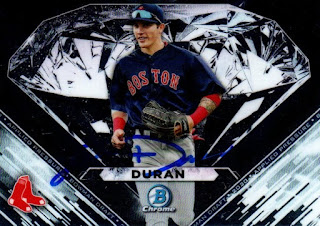 There are some cards, when I pull them, I just think to myself "I'd love to get this signed."  When I pulled this Jarren Duran 2020 Bowman Chrome Applied Pressure, I was upset that the season was not to be and he had already moved up a level in the Red Sox system.  Thankfully, I saw a private signing pop up on Facebook, and I jumped at the chance to get this signed.

Posted by William Regenthal at 4:57 PM