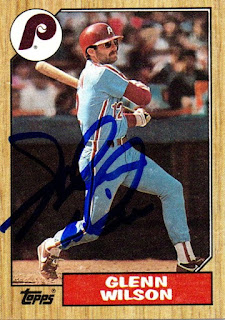 Adding 1987 Topps cards to my autograph collection is getting a bit tougher than it had been, mainly because I have gotten all of the easy guys and am now working toward adding tougher signers via private signings and trades.  Some of the cards, I'm also upgrading, as was the issue with Glenn Wilson.  My friend, Gerard, hooked me up with a signed Wilson that he found, which crossed him off of my list.  That card was a little beat up and signed in ballpoint pen, so when I saw a signing come up, I considered upgrading my card.  I realized that Wilson was on the Phillies leaders card, so I went ahead and sent both of them in for the signing. 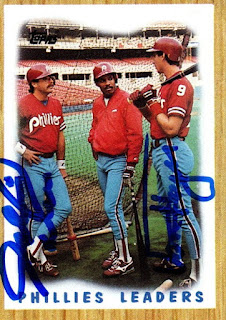 Now, all I need to finish this card is to add Juan Samuel.  I missed two Samuel signings in 2020, so hopefully he will pop up again.  He used to be a near-sure thing as far as TTM goes, but he hasn't signed TTM since 2018.  I'll wait it out and see if a signing comes up.

I mailed to the signing on February 2 and got the cards back on March 22, for a 48-day TAT.

Posted by William Regenthal at 10:58 PM