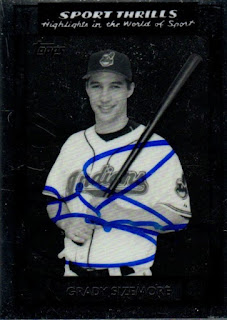 So, this 2008 Topps Chrome Trading Card History card of Grady Sizemore looks awesome in person.  Take my word for it.  The card didn't scan all that well.  I was really glad when I saw that Sizemore had signed on with Pastpros.  I had always liked him and knew this was the card I was going to send in.

Posted by William Regenthal at 7:04 PM