September 14-19 Graphing of the Riverdogs at Wood Ducks 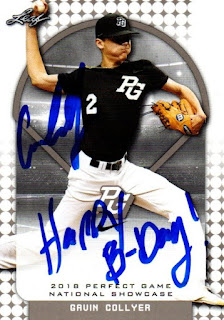 There has never been a Wood Ducks game on my birthday, and when I saw the schedule when it came out, I noticed that September 14th featured the start of a home series against the Charleston Riverdogs.  I had waited for this series all season long, and when it finally got here, it came with some added benefits.  The Wood Ducks had played their way to playoff contention and this series against the Riverdogs would prove to be very important.  In order to make the playoffs, the Wood Ducks would have to finish the season one game better than the Salem Red Sox, and I knew this would be a tough task against a team who had a 700-something win %.  I figured it would be way too much to ask the Woodies to go 5-1 in the series; so I was ok thinking going 4-2 would help their cause.
I had told Gavin Collyer at the end of the series against Kannapolis earlier this month that Tuesday was my birthday, and he let me know he would be starting that day.  He promised me a W and didn't disappoint.  I had gotten a lot of 10 of his Perfect Game cards in the week prior to the series, so he signed those for me, inscribing one Happy B-Day.  Gavin is a great guy, and really has been one of the favorite players on this season's team for Chris and I.  He allowed 2 runs in Tuesday's game, which was highlighted by a Luisangel Acuna walkoff grand slam.  What a way to start the series. 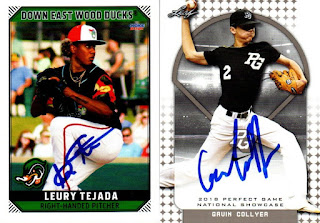 Leury Tejada was back from the IL, so I was able to knock out one last card from this year's team set. 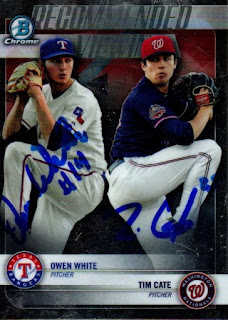 I was also able to complete two of these 2018 Bowman Chrome Owen White/Tim Cate duals.  My buddy Patrick gets the other, since he is the one who got Cate for me.
The Woodies lost Game 2 on Wednesday, 8-2; won Game 3 on Thursday, 6-5; won Game 4 on Friday, 4-2 on a strong 6-shutout inning performance by Mason Englert, and lost Game 5 o, yesterday, 6-0. 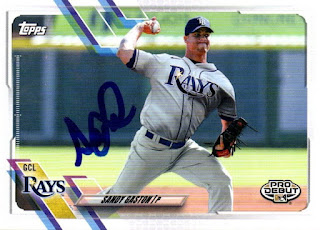 I was able to add another 2021 Pro Debut to my autograph album by getting Sandy Gaston on this card.

Graeme Stinson was really cool.  He stopped and talked to us today for a good while prior to the game.

Seth Johnson was also really cool, signing everything we had.  He was very friendly. 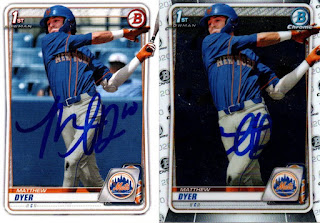 I finished up all of this year's 50/50s and card graphing mostly by Wednesday, once I realized I completely missed Matt Dyer in my Bowman box.  I was looking for Rays and missed him being with the Mets prior.

On Friday, Jayce Easley reached 70 stolen bases for the season.  I remembered to get him to sign the ticket stub today after the game, and he thanked Chris and I for our support this season. 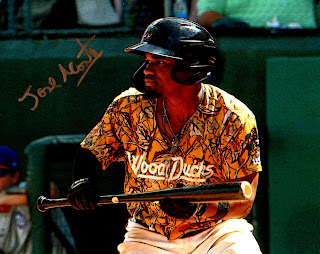 Coming into today's game, the Wood Ducks and Salem Red Sox were tied.  In order for the Woodies to advance, they had to win and Salem lose, since Salem held the tie breaker.  A masterful 7.1 inning no-hit performance by Owen White set the stage for a Woodies win, and some scoreboard watching into the evening to see if Delmarva could hold off the Salem Red Sox.  Delmarva won, 9-7 and the Woodies' ticket to the playoffs against the very same Charleston Riverdogs would be punched.  We will see them at home Tuesday and Wednesday for the beginning of the best-of-five series.
Last night, I was able to get permission from local photographer, Jimmy Kilpatrick, to print off a couple great shots he did, starting with the above photo of Jose Acosta.  I had that one signed with my bronze Sharpie, and it turned out amazingly. 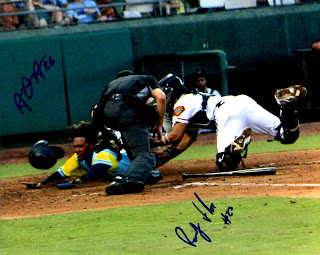 This shot by Jimmy of a play-at-the-plate between Randy Florentino and Alexander Orvalles (on an amazing throw by Cody Freeman) turned out well, and was the reason I had asked for permission to print off some of his photos. 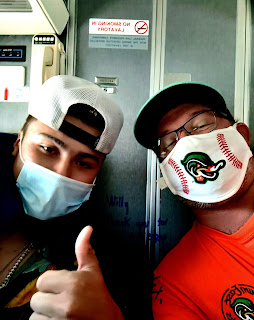 Jimmy had sent me a couple Cody Freeman photos to print off if I wanted, but I opted for the one of Cody and I on the airplane back in July.  I gave Cody a signed copy, and he signed this one prior to the game.  The signature and inscription is hard to read due to my scanner but says: "Willy, Thank you for your non stop support! Love, Cody Freeman"  Cody gave me a big hug, thanked Chris and I for always being at games and rooting the Woodies on.  I teared up, because this definitely has been the most we have ever interacted with a Wood Ducks team and helps me justify what I spend every year on my season tickets.  We really got to know the players this year.  After the Woodies win today, I got hugs from Cody, Owen White, Mason Englert, Gavin Collyer and Thomas Saggese.  Thomas gave his bat to Brady Smith to give to someone, and he naturally chose Chris.  Jayce stopped by and thanked us for the support throughout the season, as did manager, Carlos Cardoza.  Cody and I talked about his 4 stolen bases today, when I asked him if he was trying to catch Jayce in one day; the season-long running joke and/or playful rivalry was that Cody was faster than Jayce.

We had an amazing season this year, and there are two more home games to go, which I will attend.  Let's go Woodies, hopefully they can bring home a Low A East Championship.

Posted by William Regenthal at 8:00 PM