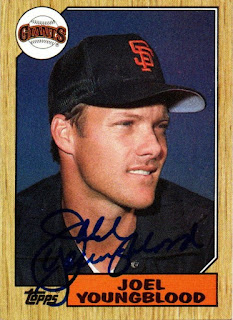 Here is yet another 1987 Topps for my set.  I got this one signed by Joel Youngblood through a private signing on SCN.  I originally sent one out to Arizona to my friend, Jackson, but he wasn't able to get Youngblood to sign.