Some Awesome IP Autos From Billy 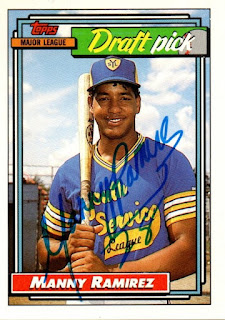 When the Down East Wood Ducks held their first exhibition game against Mount Olive College, the second person I met at Grainger Stadium (the first being my friend, Scott) was a guy I knew for a long time as the "Pickle Man."  He always wore a Mount Olive Pickles hat, which is why I referred to him as such.  After graphing together for a while, I struck up a friendship with Billy.  He has been coming to Grainger Stadium for quite a while, and I marvel at the players that he saw come through Kinston.
Recently, we decided to trade some autographs that we had gotten in the past, and he brought a small stack of cards today.  Telling me I could keep them all, I was blown away at what was in the stack after he said was a "20-minute search through his boxes..."  Amazing.  Obviously, the card that really got me was the above 1992 Topps Manny Ramirez.  I know Manny came through Kinston back in the day, but here is an early autograph, before Manny was Manny. 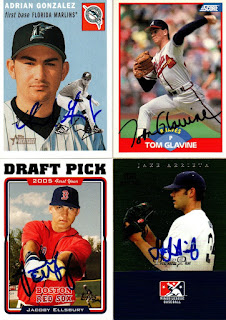 The hits kept coming, an Adrian Gonzalez, Tom Glavine, Jacoby Ellsbury, Jake Arrieta.  All of these guys were amazing finds in the stack. 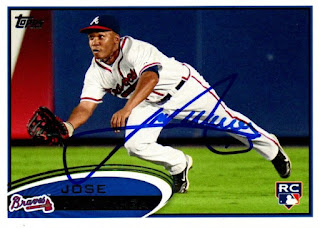 I liked this Jose Constanza because it is just a really cool auto.  It looks similar to some other guys I've seen. 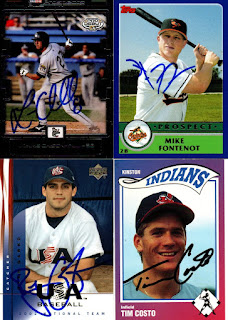 It just amazes me to think of all of the guys that Billy has seen come through as he has graphed ove the years.  I believe he told me he has gotten autographs in Kinston since the 70s.  He also told me that he used to be a popcorn vendor there, which must have been a sight! 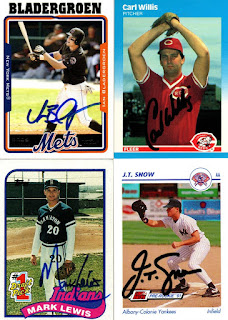 A lot of these guys are players that I have heard of over time.  I would love to get a chance to really dig into his albums and boxes to see all of the stuff he has gotten signed over the years.  It also makes me think of just how others could be amazed at the stuff I've gotten signed over my short time graphing.

These 2001 SAL Top Prospects cards were also really cool.  I like these old team sets, especially when you are able to see whatever stadium is in the background.

Thank you so much for the cards, Billy.  Most importantly, though, thank you for the camaraderie over the last several years at the games.  Like I said earlier today at the game, this is fun and all, but it is so much more fun when you can go to the games and have someone to enjoy it with.  I'm glad we have gotten close, and I look forward to many more games and experiences together.

Posted by William Regenthal at 11:09 PM