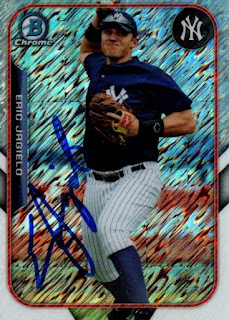 Several Bowmans were removed from my Bowman box with this TTM success from Eric Jagielo.  The above 2015 Bowman Chrome shimmer mini really turned out great.  I was glad to get this one signed, as minis are a pain to deal with in my boxes sometimes.

I mailed to Jagielo on February 2 and got the cards back on April 3, for a 60-day TAT.

Posted by William Regenthal at 5:47 PM