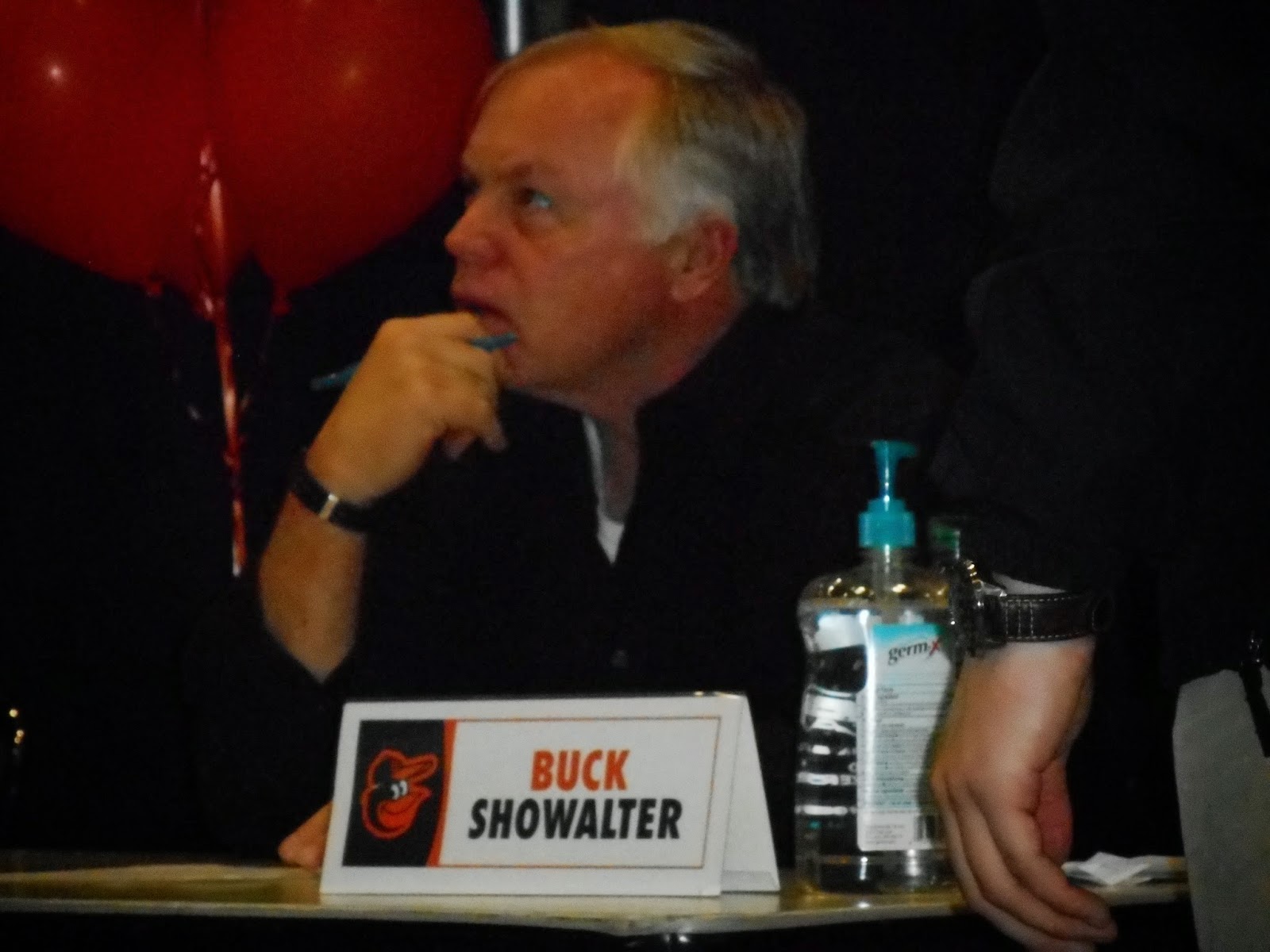 I'm really excited right now.  As I was scanning stuff for this blog post, I found out that Nolan Reimold is back in the Orioles system, as he has signed a minor league deal, with an invitation to Spring Training.  I seriously am ready for the 2015 season to start.  Before we think too far ahead, I wanted to recap the autograph stations which I had vouchers for this past Saturday.

We got in the door just before 11:00 AM, and as we made our way inside, I passed out about 15 team bags of baseball cards to kids who were also making their way into the venue.  I wonder if any of them have checked out the blog, since I included my business card in the bags.

Once that was done, we (Mom, Christy, Mal, Chris and I) all made our way to our first signing of the day.  I had 2 vouchers each for four stations and Mom had 2 vouchers each for 2 stations with us doubling up (4 vouchers) for the first session (Buck Showalter, Alejandro De Aza and Christian Walker).  With 5 of us in our group, one of us wouldn't be able to get anything signed, so my wife took my camera and stood nearby to take pictures. 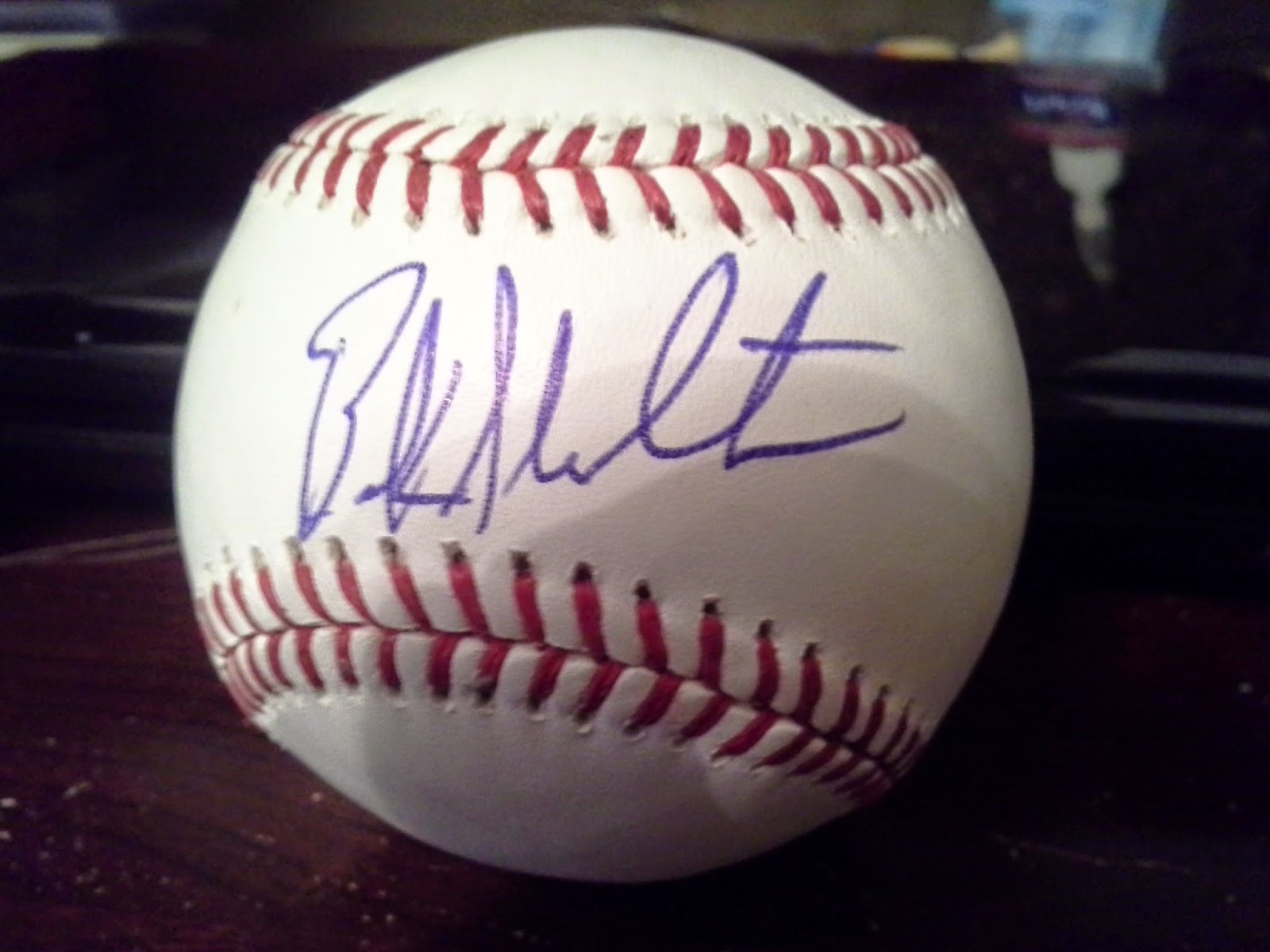 My mail goal for this year's Fan Fest was to meet Buck.  He is far and away my favorite Orioles manager (since I was too young when Earl was manager).  I always enjoy his post-game interviews, and learn a lot about life (and a lot of other things) by paying attention to them.  I got Buck's signature on my 2014 Playoffs OMLB that I picked up at Game 2 of the ALDS. 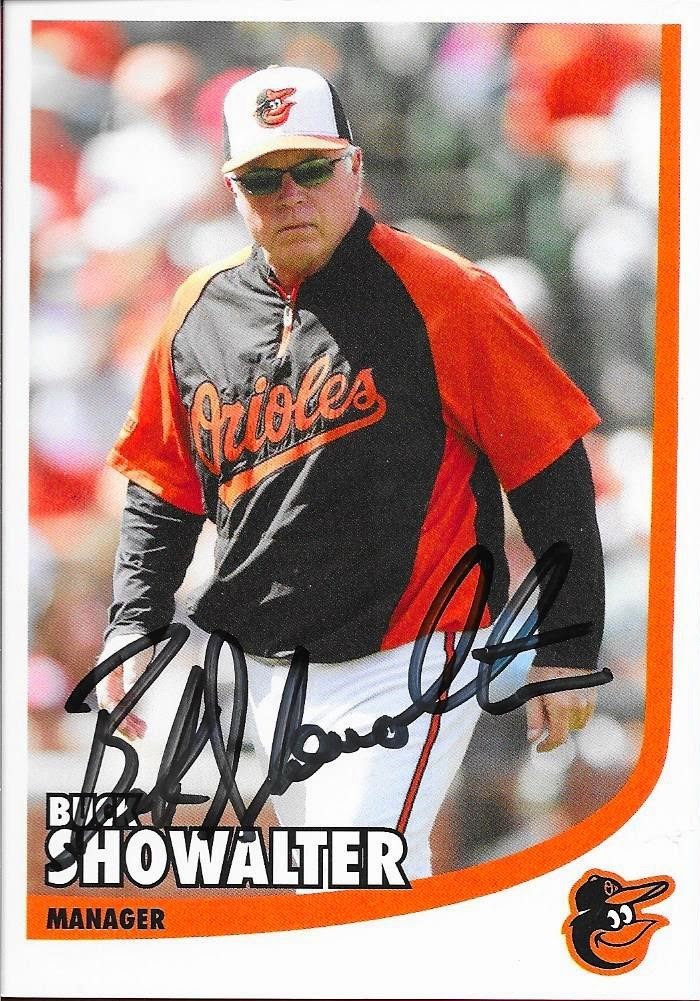 I wasn't able to exchange much more than basic pleasantries, since we were being pushed through the lines quickly.  While I wish I had more time to interact with him, I appreciated the swiftness that we were moved through the lines later on in the day.  Mom, however, was able to get Buck talking.  I'm not going to repeat what she said to him (something about how hot it had gotten in there while we were waiting in line), but she was able to get Buck talking about the weather and his morning, so it was kind of cool that she was able to chat with him for a bit.  I know Mom was really nervous before we got up to the signing table, and I think her interaction with Buck helped calm that down for the rest of the day. 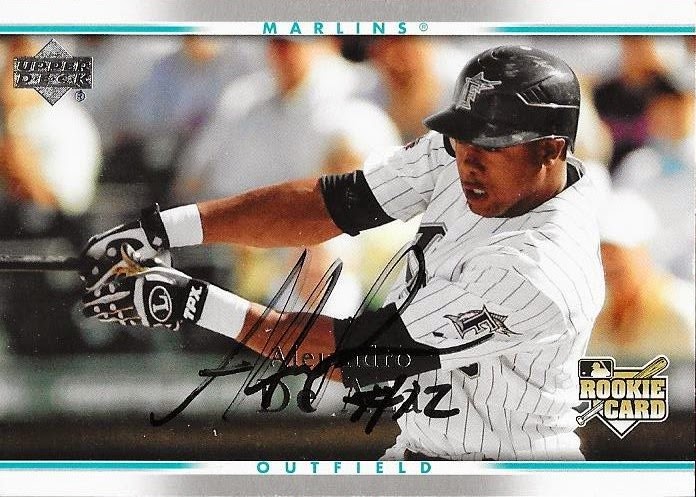 De Aza was actually the first player at the station, and to conserve OMLB balls, I got his autograph on his Upper Deck rookie card.  He actually commented on the card, showing it to Christian Walker and telling him that he wasn't even 21 in the photo. 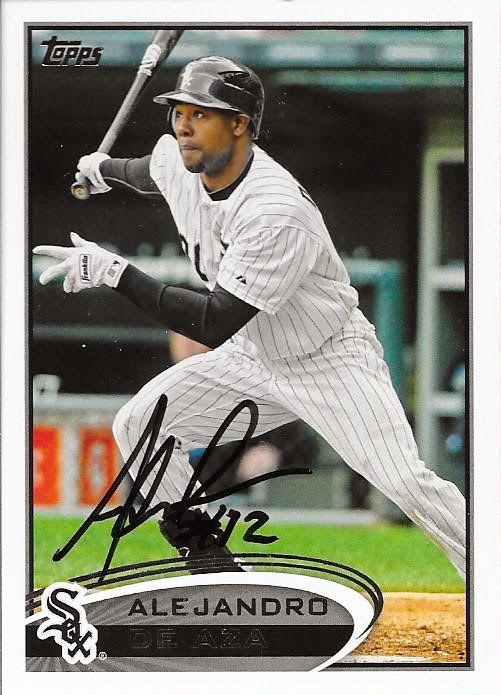 My sister, Christy, got this 2012 Topps signed for me, since she was along for the ride and wasn't too interested in taking any autographs home.  I kept telling her that she should take some home for her boyfriend, but apparently, he isn't interested in sports.  Something I might have to work on. 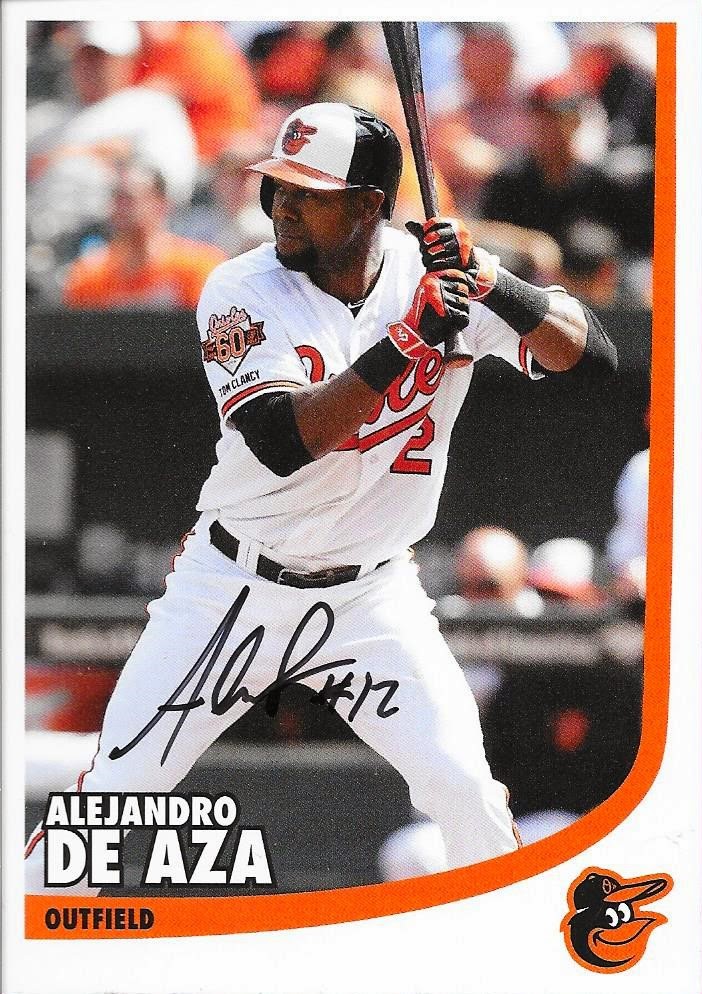 Each autograph subject had Orioles post cards available, as well.  They were only supposed to sign one item per voucher, but many of them handed out the post cards with whatever I wanted signed. We weren't as lucky with some of the later signers, but this first session yielded us at least one post card per person. 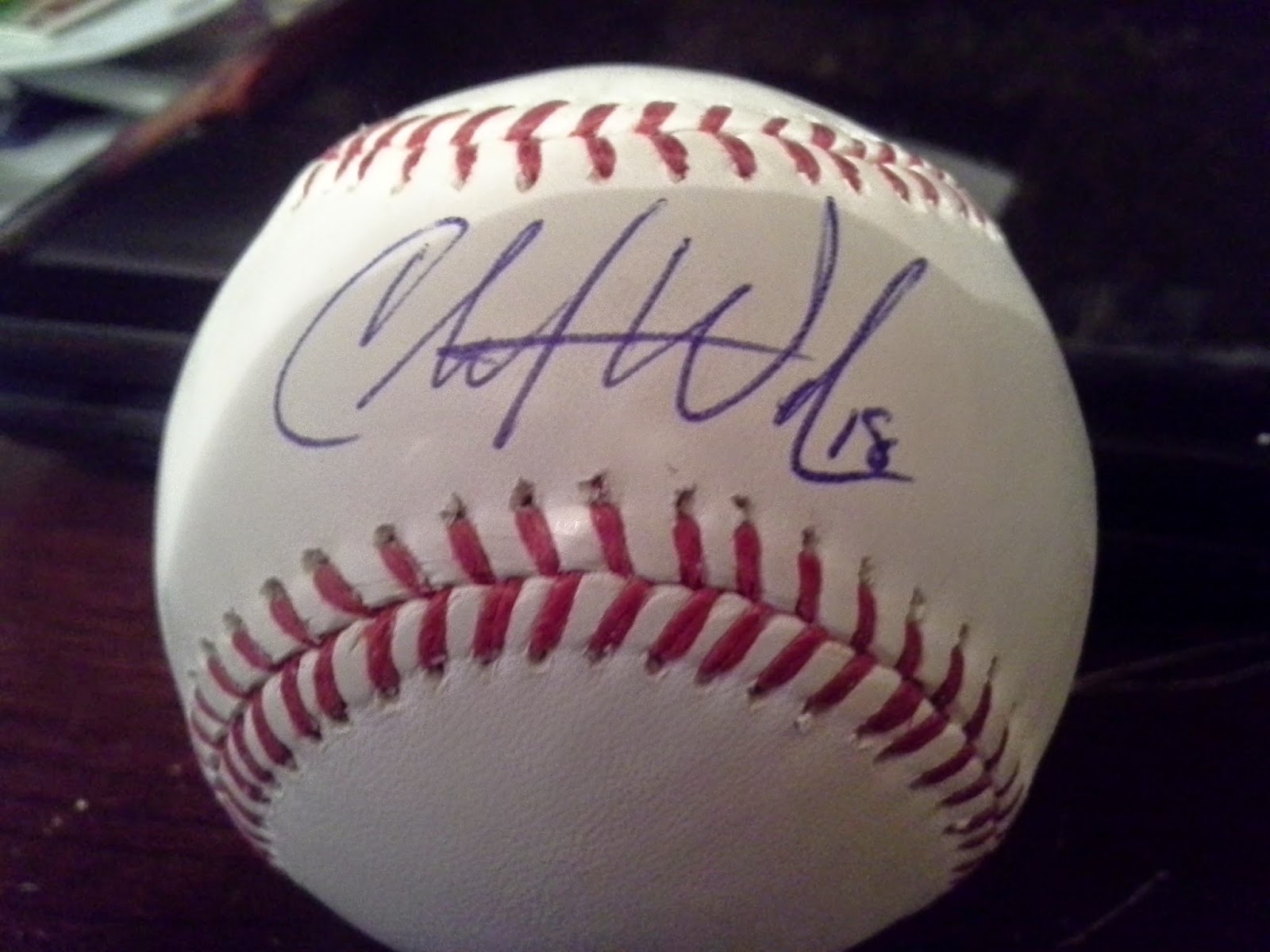 Since Christy wasn't interested in taking autos home with her, I ended up with two baseballs signed by Christian Walker.  Mom kept hers, and Chris got his 16 x 20 photo that I had printed for him signed. 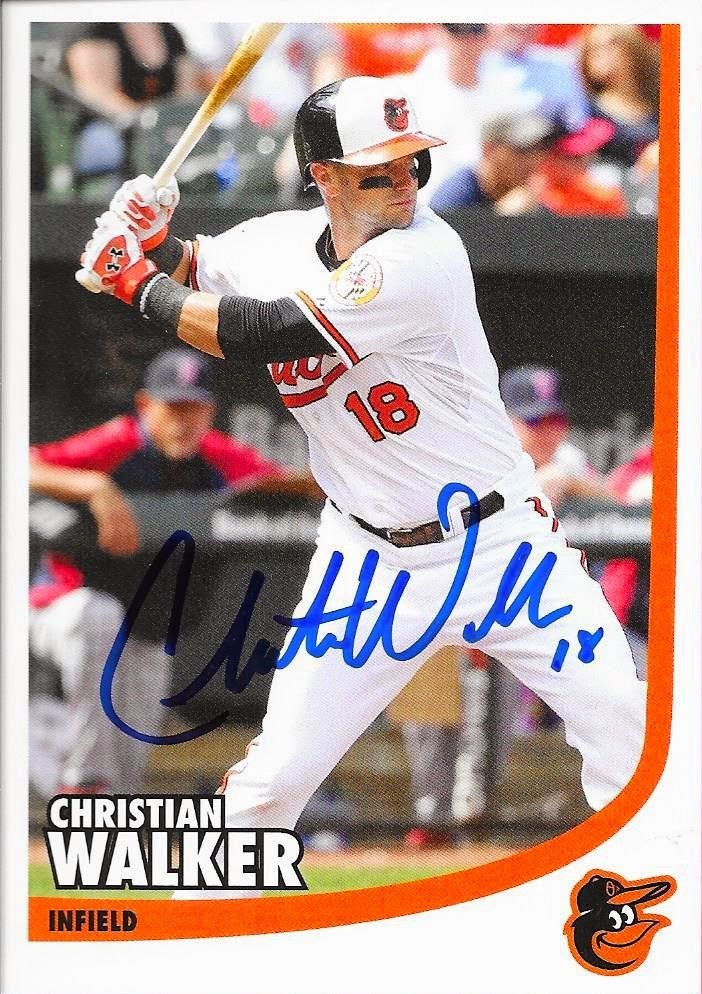 Walker also gave me three of his signed post cards.  He is a legit prospect for the O's, and is likely to take over at first base when Chris Davis leaves to free agency.  I love Davis, but it is nice to know that we have some minor leaguers waiting in the wings, after too many years of not having sufficient backups in place.  Gone are the days where veteran players will pass through the revolving door that was the Orioles.  It is nice to have some guys coming up in the system who fans can watch develop into major leaguers.  It is especially nice for me to watch Walker, as I watched him at South Carolina while hanging out with my brother.  When we met Walker, I pointed this out, which he thought was cool.  I hope he becomes a star (and I hope Davis stays, he can always DH).

So, that was a pretty successful first session.  Stay tuned for more Fan Fest autographs.
Posted by William Regenthal at 8:27 PM