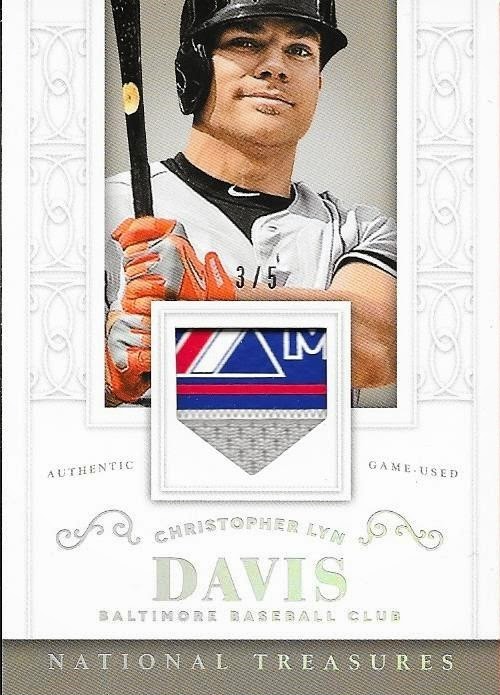 You guys have heard me talk about my great friend, Michael, quite a bit on here.  He and I completed a massive trade the other day when he put this amazing Chris Davis 2014 Panini National Treasures laundry tag card.  This card is just awesome.  I mean, really awesome.

Michael valued it so ridiculously cheap, I had to jump on it. I traded him a few signed baseballs and some signed post cards for it and a bunch of relics and autos that I'm going to use to refill my trade bait section.

I think Michael has realized that I'm terrible at the upkeep on that page, so he assisted me in getting some new stuff to populate it.  I really appreciated how he looked out for me on this card, and the other stuff he sent me.  He could have commanded a premium on the Davis tag card, but instead, valued it at cost.  He has always done right by me, and I won't forget it.  This Davis card is now a key centerpiece in my collection, and actually, I think it will take a place in my China cabinet, next to my Jimmie Foxx booket card.

Thank you so much for the deal, Michael!  I really appreciate it, and I will break the rest of the stuff up into additional posts, to be blogged in the future.  In the meantime, please head over to Michael's blog and give it a read.  He has been posting more and more lately, and has actually conducted quite a few interviews recently.  You can access his blog here.
Posted by William Regenthal at 9:15 PM