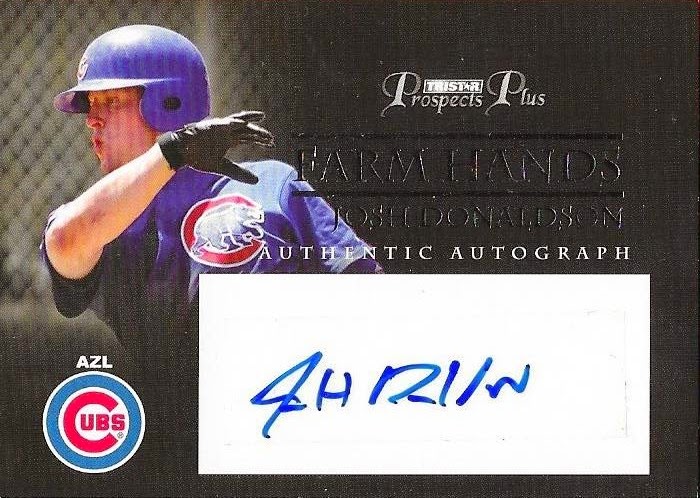 I completed a trade recently on Instagram that landed me this 2007 Tristar Prospects Plus Josh Donaldson auto.  The trade was completed over a month ago, but I'm just getting around to posting about it because I have a ton of stuff sitting here, waiting to be blogged.

The trade was this card for a 2014 Topps Chrome George Springer sepia parallel.  While it took the kid a little longer than I would have liked to ship me this card, it got here, and was in great shape.  I think he just forgot to send on time, which I can't blame him; sometimes life gets in the way.

Donaldson isn't a PC of mine, and while I respected him as a member of the A's, I know I will like him less now that he is a Blue Jay.  He is a really good player, though, and I got this card with the sole intention of adding a few good player autos to my collection.  Not necessarily guys that I PC, but ones who I think are pretty good, and will be fun to find when I thumb through my boxes.

I've had a few folks already ask me if I would trade the card, but I'm not really inclined to do so, for the reasons stated above.  In the vein of why I got this card, I actually have been in the process of picking up a few others for that same purpose.  Just relics and/or autos of guys who I feel are pretty good players.
Posted by William Regenthal at 6:28 PM