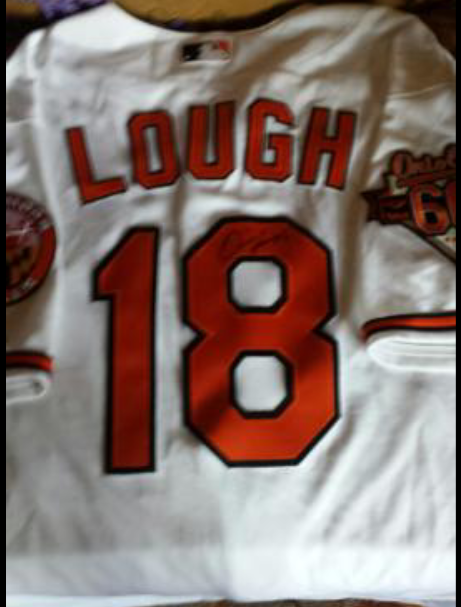 William had vouchers for 1 more station. His wife, Mallory and I( his dear little old mommy) got to wait in line for this one. A little back story first. While Mallory, Christy and Christopher checked out the kids section of Fan Fest, William and I headed to the Memorabilia room. After digging through a gazillion jerseys both new and used, I dug up a game used David Lough jersey. I was getting ready to put it back when William mentions that Lough would be at the last station and I should buy it and have it signed. Sounded like a good idea to me so we headed for the checkout line. As we are threading our way to check out William(still searching the tables) spots a box of signed(by Buck Showalter) game line up cards and lo and behold the card at the very top is the line up card for my very first MLB game that William and family took me to over the summer. It also happened to be Gausman's first win as a starter game( what are the odds of that card being at the front of the stack!), of course I had to buy it not only for the above mentioned reasons but because Gausman would also be at the last station. Boo Yow!!!
Being the last station(4:40 I think) we were all worn out and William and I hadn't had anything to eat since 8:30 am.
Mallory and I waited patiently in line with me rehearsing just how I was going to ask Kevin Gausman to sign my line up card.
Two people in line ahead of us I'm trying like mad to get my line up card out of the plastic sleeve it is in and the stupid thing will not budge! Panic!!! I don't want to tear it, maybe it's not supposed to come out, can he sign the plastic? These are the things running through my head as we inch forward. Just as we hit the steps I get the card out! Gausman is the first signer , I lay my card down and go into my rehearsed spiel. " This was my first MLB game and also your first MLB win as a starter. Will you sign it like that?" " He replies " Oh Yea. It is." and he does. Afterward my daughter-in-law said all the volunteers thought it was very cool that I had the card.
Next up was Wayne Kirby. As I handed him William's ball to sign he asks me " Ok. What story do you have for me". I tell him my son wants the ball signed on the sweet spot but I don't know what that is. As he signs it he says " It's sweet because I signed it".
Ok David Lough. Wow! In line Mallory kept commenting on his abs, blah, blah, blah.  Mrs. No Brain to Mouth filter hands him her jersey to sign and proceeds to tell him that my daughter-in-law wants him to take his shirt off! Wayne Kirby, listening in starts in on him!" Oooh take your shirt off."  Kirby is practically begging Lough to strip and Mallory is turning a lovely shade of red. I move off the stage and Mallory tells everyone it wouldn't be fair to the other ladies and he can just take it off later in private!
A final swing through the memorabilia room yields no new goodies so we wait in the freebie line which has dwindled down to a few dozen die hards. The loot we came out with was worth it. Everyone got an Orange Crush action figure, Oriole bird pillow pet, stacks of rally towels , playoff score cards and Orioles magazines.
It was a long walk back to the room lugging all of our treasures, where we regrouped and FINALLY went to eat.
It was my first Fan Fest and was glad I was invited to go. Christy enjoyed getting away from home for the weekend. I'll probably go again. Next time I'm bringing a snack and some water! 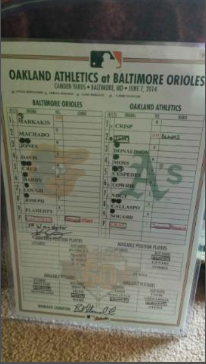 Posted by William Regenthal at 8:41 PM