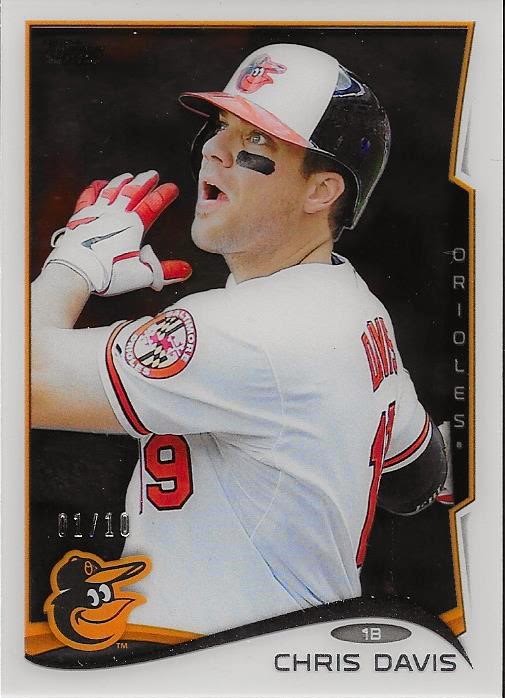 Ok, just so you all know, I love these clear acetate parallels.  I've loved them since Marvel started putting them in their cards back in 1993.  They just look so cool.  I was really into Upper Deck Element when they came out and I was really excited when I saw that Topps was doing the clear parallels in 2014.  I got so lucky on the Series One Chris Davis in that no one knew about the cards yet and I got mine for less than $10 on Ebay.  Unfortunately, word spread about them and they started going for $40 - $50 thereafter and became increasingly hard to find.

When Series Two came out, I had to be vigilant on grabbing a Davis because I knew that if I didn't grab one right away, I may never get another chance.  I searched and searched Ebay after Series Two came out, but hadn't seen a clear Davis show up until a month or so went by and I saw this one.  Numbered 1/10, I bid on it right away and waited.  I made sure that I bid high enough that no one could swipe it from me, and I ended up winning the auction for about what I expected, just above $40.  Ouch.

Well, I figured I would have to pay a premium this time around, and was prepared to do so.  I'm happy to have this card in my collection.  I still am PCing Davis, even though he has had a horrendous year.  My opinion is that he came back too soon from his oblique injury and hasn't fully healed.  I sure hope he can get his stroke back this season, because the Orioles offense is struggling.
Posted by William Regenthal at 12:18 PM