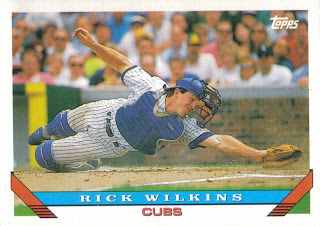 Hey guys.  I'm in the process of consolidating a bunch of cards in an effort to make some room in here and also update my: Want List and Trade Bait pages.

I have been needing to sort my 1993-1996 Topps cards for a long time so I can finally figure out which cards I need so I can finally put these to rest.  In doing so, I have discovered a ton of cards that I would like to go through and sort so that I can send some out in my 'random mailers' or trade packages.  Part of this effort will result in a change to my 'trade bait' page.  I plan on putting a list on there of folks I usually trade with and what I typically pull for them, be it out of packs, box breaks, card shows, etc.

I know there are some bloggers who like certain types of cards, but I honestly get mixed up on who likes which type of card.  So, in an attempt to realize one of my New Year's card resolutions, I would love to get some comments and emails concerning these types of cards, teams, trades.  If you have emailed me in the last couple weeks about certain cards, please bear with me, as I am trying to get stuff together (and it is likely that I have emailed you back, but I can always use a reminder).  So here we go, here is a list from my memory on who/what I pull for folks.  If you want to get on this list, it is really easy, comment or email me.  I don't want much in return, maybe some Orioles or some stuff from the Want List.  Also, I used to pull Dodgers and Cubs cards for a few guys who are no longer trading, so those are open.  I also got a huge box of stuff from a friend from work.  There's a lot of 1990s overproduction era stuff in there; I could probably put a set together of 1990 Fleer if I wanted to (but I don't), plus there's a stack of 1985 Fleer and LOTS of 1987 Topps.  Anyone want to make some sets?  I was going to put some of it on Craigslist, but I really don't want a massage to go with the box...  Anyway,  here we go:

If there are any other types of cards, teams, etc that ANY of you are interested in, even if you have never commented on my blog before, please let me know.  You can email me at wregenthal (at) hotmail (dot) com.  Thanks for the help guys.  Once I get this list populated, I'll put it on my trade bait page.  Also, I lowered the prices on some of the stuff I had on COMC, so remember to check it out.  I'd like to thank the Daily Dimwit for purchasing my Valverde Silk card.
Posted by William Regenthal at 12:13 PM

i collect all dodger cards, cards that show the double play turn at second base, o-pee-chee variations, non-red sox nomar garciaparra cards, all cards of players featured as a dodger in the 1978 topps set (lee lacy, rick rhoden, charlie hough, etc but especially steve garvey, davey lopes and ron cey). and, i've got a bunch of cards to trade. hope that helps.

I am always interested on trading for Giants I don't have.

I do Braves, of course. Team sets going back to 1952.
Player collections of Chipper, Smoltz, Glavine, Maddux, Freeman, McCann, Kimbrel and Adam LaRoche.

I collect Yankees as well as Glavine, Blyleven, Sabathia and Rivera, amongst others !

I am a Dodger collector for the most part. I have also been stockpiling up on some hall of famers as well.

Please take a look at Got it. Got it. Need it. for a variety of want lists.

I am about to make a similar list myself. I collect:

I have tons of teams available (only 4 have been claimed!) as trade fodder for anyone interested....

Seen that you didn't have a Cubs collector on the list. I collect any type of Cubs cards, new or old, it doesn't matter to me. I'd be more than happy to swap some cards with you. I don't have a whole lot of Orioles cards (mostly newer ones, from 2012), but I'm sure we could work something out.