The third of three baseballs I picked up was this Hoyt Wilhelm signed baseball.  It was REALLY cheap on ebay, but was PSA/DNA authenticated.  The photo the seller had wasn't the best because it had looked like the signature was faded.  I got it yesterday and it looks really good.  I was very happy with it. 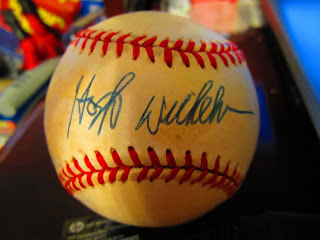 Hoyt Wilhelm is really cool in my mind in that he was from the area of North Carolina that I spent a lot of time.  He was born in Huntersville and went to High School in Cornelius.  We lived in that area for about ten years before moving out here to Greenville, NC.

Wilhelm was born in 1922 and died in 2002.  He played in the majors from 1952 to 1972 for the Giants, Cardinals, Indians, Orioles, White Sox, Angels, Braves, Cubs and Dodgers.  Whew, that's nine teams!  He was one of the original high profile relief pitchers, and the first of which to be elected to the Hall of Fame.

Wilhelm is my 62nd Hall of Famer.
Posted by William Regenthal at 8:22 PM

How many are in the Hall of Fame?

Let me rephrase my question. How many more balls do you need to get?

I have 62 of 297 total Hall of Famers (around 21%). There are several who I doubt I will ever see, such as Babe Ruth, Lou Gehrig, Old Hoss Radbourn, Addie Joss, etc, but you never know what you'll come across...