I went a little crazy on Ebay the other day.  You already saw the Virgil Trucks 1948 Leaf that I picked up.  That knocked out about half of the money I had saved.  I used the rest of it to knock off 3 Hall of Fame baseballs and a 1/1 card.  Today, I will showcase the first of the three baseballs. 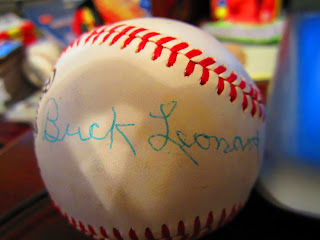 I had been watching a couple Buck Leonard baseballs for a while and when I finally had the money saved, I chose this one as the one which I would add to my collection.  It looks a lot like my Johnny Mize ball, as far as the ink used on the signature.  Something really cool about the ball itself is that is it a Bart Giamatti ONL ball.  You may or may not know that Giamatti's son Paul is an actor, known for roles in Sideways and as 'Pig Vomit' in Howard Stern's 'Private Parts.'  Bart Giamatti was also the former commissioner who banned Pete Rose for life in 1989, only to die of a heart attack several days later.

Anyway, back to Leonard.  Buck Leonard was born in 1907 in Rocky Mount, NC (just an hour or so drive up I-95 from here).  He played his entire baseball career in the Negro Leagues, most notably for the Homestead Grays.  Leonard and teammate Josh Gibson were known as the 'Thunder Twins.'

Leonard was elected to the Hall of Fame in 1972 along with teammate Gibson as part of a special Negro League election.  Following his retirement, Leonard remained one of the forefront ambassadors for the Negro Leagues until his death at the age of 90 in 1997.

According to the National Baseball Hall of Fame, Leonard had approximately 471 hits in 1,472 recorded at bats with a .320 lifetime average and 60 home runs.  Who knows how many hits and home runs he really would have if proper record keeping was used at the time he played.

Leonard is now my 60th Hall of Famer.
Posted by William Regenthal at 5:11 PM

Nice pick-up! Can't wait to see what else you got!