I decided the other day that I would start a small project with my TTM attempts.  I want to try to get signed baseballs from the remaining members of the 1945 World Series Champion Detroit Tigers.  Currently, there are 5 living members of the team.  I already had 2 of them in Virgil Trucks and Billy Pierce. 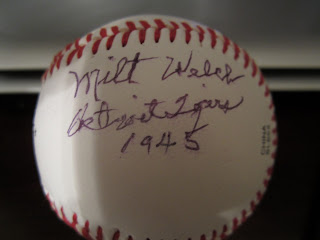 So, on January 7, I sent out 3 TTM requests to the other remaining members of the team; today, I got one of them back.

Milt Welch (b. 1924) was a catcher on the 1945 Tigers.  He only played in one game that season and during that game, he came to bat only two times.  He didn't get a hit in any of those at bats.  He wore uniform number 23 during his lone game that season.

When I sent my TTM request to Mr. Welch, I included a note with a couple questions, hoping he would respond.  Mr. Welch did respond briefly by writing beside my questions.

Did you save anything from the game you played in? No.

Did you receive a World Series Ring? Yes.

Are you still a baseball fan today, and if so, who do you follow? I watch all games, no favorite anymore.  Just a fan of the game - Milt Welch.

I am really happy that Mr. Welch took the time to answer my questions.  They were pretty simplistic questions, but I wasn't wanting an essay.  I'm happy he took the time to do all of this.  I did the same for the other two members of the team that I mailed to, so I hope they also answered theirs.

Welch is my 43rd TTM success.  It took six days for me to get my ball back and he signed for free.  Also, unlike yesterday's TTM failure, I got my pen back!
Posted by William Regenthal at 5:51 PM

Collecting the '45 Tigers would be a sweet project. Hope this goal becomes a reality for you!

So is it safe to say the Tigers have become your mistress team?

I'm not sure about 'mistress team', but I do like a lot of their historical players - Gehringer, Greenberg, Trucks, Newhouser, etc. It helps that my wife is from Detroit and likes them also!

Even though its sidepaneled, thats so awesome looking and it's neat that he took out his time to answer your questions! Good luck on the other two!