Today, I received a TTM success from another member of the 1945 World Champion Tigers, Les Mueller. 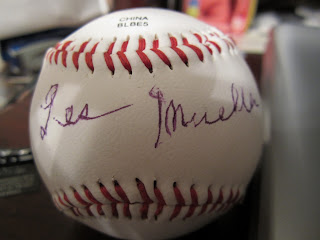 I mailed to Mr. Mueller on January 7, 2012 and received the ball back today, January 17, 2012, making him a 10-day TAT.  Mueller signed my ball for free.  I had included questions (much like I did with Milt Welch), but didn't get any answers back.  One look at the signature can tell you that Mr. Mueller is well up there in age (he is 92).

Mueller is my 44th TTM success and is the 4th living member out of 5 from the 1945 Tigers that I have gotten TTM.  The last one I need is Ed Mierkowicz.

Posted by William Regenthal at 5:55 PM