Yesterday, I told you that I bought three Hall of Fame signed baseballs on New Years Eve and two of them arrived in the mail yesterday.  The second ball to arrive is this Hal Newhouser signed baseball. 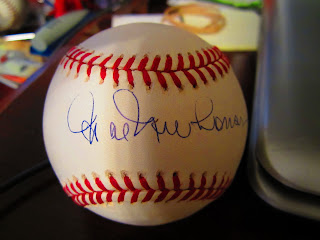 I have been watching Newhouser signatures ever since I read Virgil Trucks' book.  Newhouser played on the Tigers with Trucks.  They were part of a pretty formidable rotation including also Dizzy Trout, Fred Hutchinson and Stubby Overmire.

I think I am going to attempt a little side project, in addition to my Hall of Fame signed baseballs.  I think I am going to try to get as many signed baseballs from players on the 1945 Tigers as I can.  I already have Virgil Trucks, Hal Newhouser and Billy Pierce.  I sent out 3 TTM requests this morning to the other 3 living members of that team (there are 5, Trucks and Pierce completing the 5).
Posted by William Regenthal at 1:29 PM

Nice pick-up! Hard to imagine a pitcher winning back to back MVP's and almost winning a third!