Normally, I write about all of the TTM successes I have, but sometimes, there is a failure or two mixed in.  Today, was a failure.  I received my mailer back from Marvin Miller, whom I had really wanted to get an autograph of, but inside my mailer was my ball (which was blank) and this note. 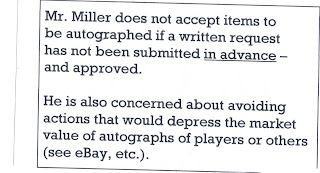 I understand what he is getting at with the note and the Ebay comment.  I have seen too many times where people abuse the privilege of TTM by sending 4, 5, 6 cards to someone instead of requesting only one autograph for themselves.  All the time on sportscard forum there are people who talk about sending 6 cards at a time and complain when only one comes back signed.


Of course, I just did an Ebay search of Miller's autograph... I think he might be more concerned about diminishing the value of HIS autograph; signed and authenticated Marvin Miller baseballs are going anywhere between $150 - $300 on Ebay.

So, that being said, I may send a letter thanking him for his time, that way, I can climb off the bitter bus, because, really, it is his choice who to sign for.

I would have liked my pen back, though.....
Posted by William Regenthal at 5:48 PM

Certainly does make you wonder how hard it is to get approval in advance.

Hey, you win some you lose some.. Hopefully your attempt at getting approval will work out!