I hope you all like the new blog design, I thought it was a good time for a change since I have had the old design up for over 2 years (I think).  There is a lot less going on in the background, which keeps the focus on the actual posts themselves.  Also, the header picture was taken by me in Cooperstown, at Doubleday Field.  I thought it would tie in well with my pursuit of Hall of Fame signed baseballs. 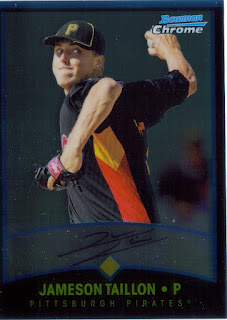 I picked up some packs as we passed by the card shop the other day while out shopping.  I had gone to Staples to pick up some sheet protectors and a small binder.  I am going to keep all of my COAs and LOAs in one place, instead of filed away in various manila envelopes, folders and my 1920s Phillie Blunts cigar box (a remaining relic from my great-grandfather, jeez, I should post that sometime...)

Anyway, we bought several packs of Topps Lineage, Bowman Chrome, Bowman Platinum, Draft Picks and Prospect and Topps Chrome.  The above Jameson Taillon is one of the highlights of the Bowman Chrome. 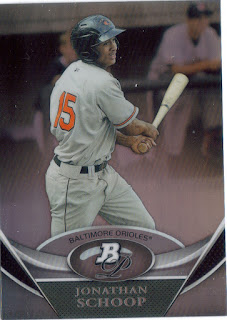 I pulled this Jonathan Schoop (pronounced SCOPE, apparently) out of the Bowman Platinum.  He is fast becoming one of the Orioles' best prospects, behind Dylan Bundy and Manny Machado.  I hope he lives up to the billing, because the Orioles haven't produced a legit position player from their system since Nick Markakis (not a knock on my favorite, Nolan Reimold, at all. I'm hoping he busts out this year and stays in the majors.  No one is pulling harder for Nolan than I am). 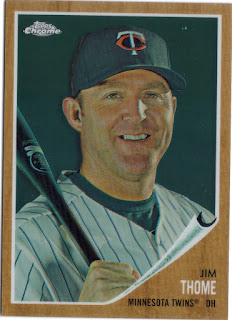 This Topps Chrome Heritage insert came out of the Topps Chrome pack that I bought.  I really missed the boat on Heritage.  I only busted one box of it.  I would have done more, but money was tight at that time and now the boxes are pretty much gone.  Oh well.  I like this card of Thome, whose career is winding down.  He should be a lock for the Hall of Fame.  I think so, at least.  Who knows these days.  I do wish he would have signed my baseball for me in 2010 when I was mere feet away from him.  I might try him TTM once Spring Training gets closer. 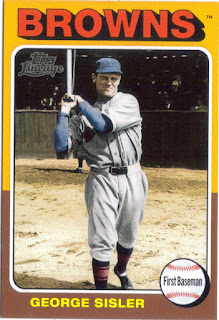 I really like this Topps Lineage '75 mini of George Sisler.  I don't have near enough Browns cards or memorabilia.  I might need to add some to my wishlist for the coming year.  Sisler was a really good ballplayer.  He doesn't get much recognition these days, since there were some bigger names playing when he was active, but until broken by Ichiro, Sisler's single season hits record stood for 80 years. 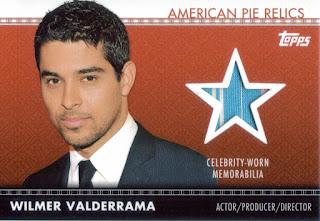 Finally, I pulled this relic out of Topps American Pie.  Since my wife was with me, she and I both picked up a couple packs of American Pie.  She is a big movie buff, so I thought she would get a kick out of the cards.  They were ok.  Kind of like Upper Deck's 'Piece of History' from a few years ago.  I'm not sure if I'll get any more packs of them, though.  As for the Valderrama relic?  Well, I'm definitely not a fan of That 70s Show, I always found it to be dumb (just my opinion).  Also, I'm really glad it wasn't Ashton Kutcher.  Because, well, he is probably my least favorite actor.  Ever.  Valderrama, he's ok, I guess.  I can probably sell it at a card show, which works out for me, at least I'll get a couple bucks out of it; or I can trade it, if any of you are interested.  I'll add it to my for sale/trade page.

By the way, please do check out that page.  I plan on adding some stuff to it to make it easier for people to see what I have that is available at the right price and/or offer.

Posted by William Regenthal at 10:57 AM

I like the new look. Nice pickups too. I actually liked That '70s Show. It was supposed to be dumb so I guess that's why I liked it.

I love that show! Fez! Hahahahah nice man, love the new design by the way.

like the new design of the site....really like the Taillon card you pulled! I agree with you about Sisler, he does not get the recognition that he deserves