Our first autograph voucher was for the 11:20 signing that featured Brian Matusz, Alfredo Simon, Ryan Adams and Jason Berken.  Brian Roberts was supposed to be in this group, but he bowed out due to the lingering effects of the concussion he suffered in 2010 and re-aggravated last season.  It definitely is a shame he couldn't make it, but as someone whose family member suffered a sports related concussion, they are difficult to overcome and very easy to re-aggravate.  My brother suffered one in college in 2003 from Shawne Merriman (yes, THAT Shawne Merriman), and he still hasn't slept right since.  Anyway, on to our autographs: 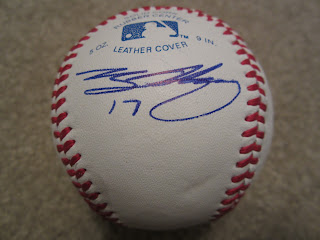 I got another ball signed by Brian Matusz.  He was really nice, speaking to both Chris and I.  He let Chris come behind the table and take a picture with him.  I really appreciated it.  I really hope Matusz's time with Brady Anderson this offseason has helped him come into spring training in much better shape than last year and he makes it very hard for Buck and Co. to send him to AAA Norfolk to start the year... 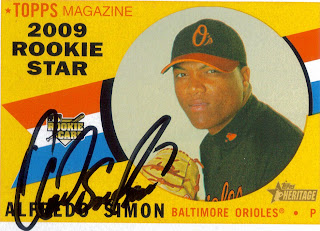 Is it just me, or does this Topps Heritage Rookie Card look great signed?  Alfredo Simon didn't say a whole lot to us as he signed our card, but it was still great to meet him and say hello.  I think he is vastly underrated and has done everything asked of him by the Orioles.  He has started, closed, pitched in relief, etc.  I hope last offseason's difficulties have been put behind him for good. 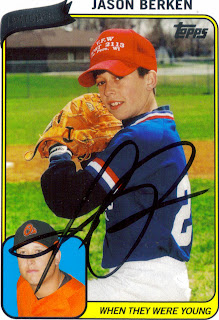 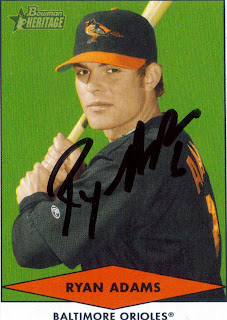 Ryan Adams worked his way up to the majors last season after having a solid campaign in the minors.  He is a candidate to start at second base if Roberts isn't ready to go when the season starts.  If Roberts is healthy, look for Adams to be a reserve player on the bench.

We had a good time getting autographs from these guys and had two stations to go for the rest of the day, but the next session was about 3 hours from when we got out of line, so my next post will discuss my meeting with a friend of the blog during the break... Stay tuned!!!
Posted by William Regenthal at 6:01 PM

Dude that rookie does look awesome signed! It looks almost like it is a topps certified on card auto!

The bright colors on that rookie card really help the sig pop. I'm glad you got to share that experience with your son.